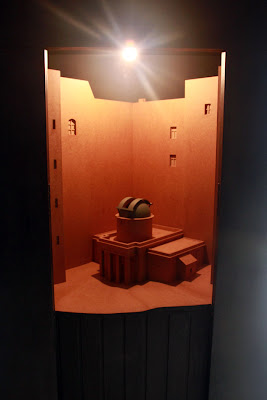 In the German pavilion at the Biennale there is a tall box, about the same size as a phone booth, in one of the rooms flanking the main hall, which emits the deep sound of a man speaking, his voice can only be made out as you approach the rear of the box and lean in to a window in its side. 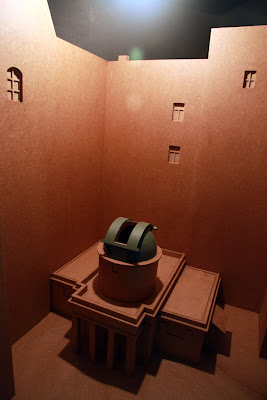 Through the window is a model of what looks like a monumental observatory, whose real size is belied by the windows on the walls behind, which seem to dwarf its pomp to that of a doll's house. The voice is slowly, in a manner somewhere between that of a documentary and a fairytale, telling over and over again, in italian, english and german, the story of Eugene Severin, an amateur astronomer from the early 20th century.
Severin was paralysed from an early age, and was fawned over by his wealthy parents, who did everything to ease the child's difficult life, eventually building him a study room in an empty garden house at their estate, where he spent most of his youth in the care of his maid, conducting science experiments, studying astrology, and dreaming of one day becoming an astronomer, of discovering vast new worlds from the tiny and enclosed world he inhabited. As a young man he came into a large inherited fortune, and bought a plot of land outside Berlin, where he planned to fulfill his dreams, commissioning the architect Olaf Malmhoff to build him a magnificent observatory in which to live and work for the rest of his life, gazing at the stars. He would spend days in anticipation of the newfound pleasure of living there, of how different it would be to the isolation of his life up until that point, imagining himself as a recognised scientist making important discoveries, holding court to famous parties for the elite of the city at his observatory. He filled his time thinking such thoughts as the period of construction dragged on and on, with the architect embezzling vast sums of money from the project, and failing to mention to Severin how vast, towering tenement blocks were being erected all around his little observatory, right up to the edge of its little plot, blocking out the daylight, and at night, all but a few stars in Orion's belt. Severin only found out when he visited the building upon its completion. With no money left of his fortune, having had it whittled away by the lengthy construction and Malmhoff's embezzlement, Severin moved into the observatory together with the same maid he had lived with since childhood. He continued to live there, staring through his telescope at the small patch of sky that could be seen through the cornices of the tenements, until his death in the early 60s. His niece, a failed writer, now opens the house to visitors for a small fee. 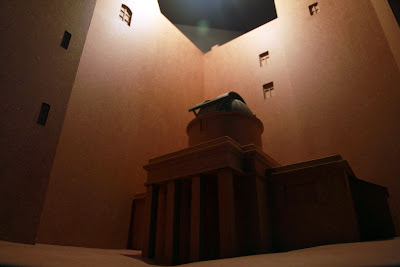 The theme of the German Pavilion, brilliantly illustrated in Severin's story box, is Sehnsucht, or a powerful feeling of longing twinned with a sense of irretrievable loss, and how this concept manifests itself in the urban realm, addressed elegantly in Severin's story through the weaving together of the pity of a personal tragedy, the sting of rural retreat, the meanness and avarice of industry, and the communal pathos of the restricted urban horizon and the confined gaze, all compressed into one powerfully evocative architectural scenario that manages itself, silently, to contain and convey the sense of longing and sadness of the entire tale. 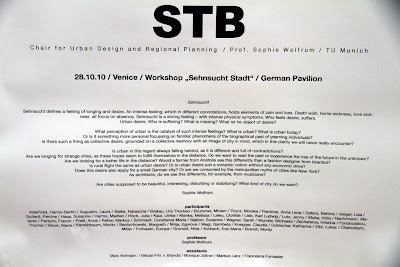 The main hall is full of architect's sketches responding to the notion of Sehnsucht (one of which below), mostly not managing to connect with its potentially powerfull emotional content, possibly because so many of them seem to be ideal proposals, nostalgic constructions from the creator's imagination that achieve something they have always desired, or long missed. And these completely negate the power of sehnsucht, which exactly lies in the deferral of arrival, it gains in potency the further it is from reaching that which it longs for, and indeed gains strength the more vague the object of longing becomes. The architects and their sketches construct answers to the feeling of longing, as if it were a problem with a solution, when really the beauty of it is in its contemplation, in the exploration of the actual feeling of longing itself as a shared contemporary condition that unites all of us, and which can be stimulated in us, connecting us more intimately with each other and our surroundings through stories, and places like those of Eugene Severin and his little eclipsed observatory. 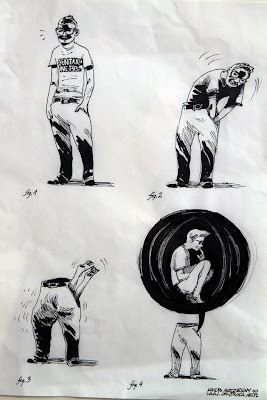 Posted by Adam Nathaniel Furman at 19:55