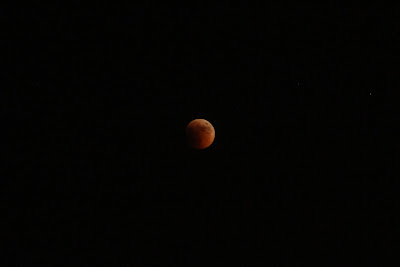 A shot I snapped of the full lunar eclipse this june. I hadn't known about the event, and whilst driving back home together with my parents, got out of the car to stare -agape- at a moon whose light was rapidly disappearing, burning itself out like the phosphorous on the head of a match, and which after a few minutes left behind only an after-image of itself in muddy orange. Like someone had deftly swapped our moon for Mars, an impostor was up there.
Later I sat for the rest of the event in a garden, where for an hour or so I was alone with what sounded like a creche full of terrorized and tortured babies, as the surrounding population of suburban cats wailed in unison at the stranger leering down at them, like its arrival was the memorial of some irreparably painful event. The dogs were at it as well, barking from every direction in regular but overlapping intervals, in warning lest the visitor turn out to intrude on more than their sky.
I didn't look for meaning in it, but I could sympathise with someone experiencing the same thing coming to the conclusion that the facts of barking dogs, whining cats, and a moon disembodied by the spectrum of light refracted by the edge of the earth's atmosphere, somehow didn't add up to the measure of the event's uncanny immensity, because they don't, and it is that unbridgeable deficit between fact and impression, between the strength and strangeness of a moment and the tawdry ineloquence of its posthumous communication, that in vain I guess Im trying to fill with these words, and a photo.
Posted by Adam Nathaniel Furman at 07:09