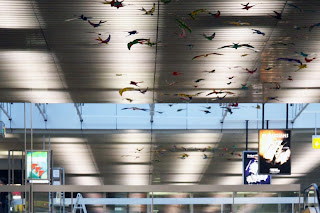 The old terminal of the city’s airport is an essay in well proportioned, precisely detailed, slick high modernism, of the sort that in any other country would either be so hidden by a grimy cake of ill considered additions, and a total lack of cosmetic maintenance, that its original virtues would be entirely submerged; or else would have been lovingly rediscovered, restored, and elevated to a higher plane of architectural existence by the status of historical idol-hood that is conferred on a building together with the ‘heritage’ budget for its restoration. 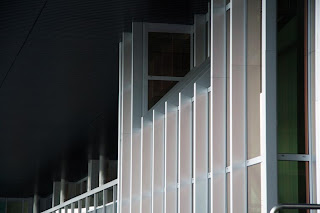 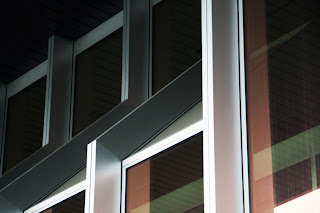 Elsewhere the building would have been through several cycles, through which it would have suffered and been reborn, or at least seen itself be modified and altered repeatedly to accommodate evolving circumstances, the place would have been marked by time, but this building seems totally frozen at the moment of its inception, perfectly maintained on the cusp of the 1970s, unchanged except for a few television screens for displaying arrival times, that look as if they are from the 80s. It doesn’t have the totally contemporary bright-shiny-modernity of the renovated Royal Festival Hall (that impossibly idealised past newness, like aggressive plastic surgery), but is instead a slightly faded form in whose lack of lustre, but abundance of intact atmosphere, can be read a consideration and awareness of aging and decay that is far more consistent, perhaps frighteningly so (like embalming at birth) and far less sentimental than our fitful, and guilty, reconstructions of buildings raped by inconsideration. In this rigorously petrified architecture, which seems to deny time, there are endless parades of posters and advertisements for luxury watches, from the whole gamut of manufacturers in the area (you can see two in the right of the first photo) from Audemars Piguet to Baume et Mercier and Rolex. 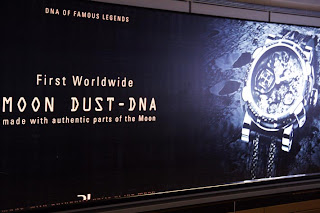 Advertisment for a luxury watch in Geneva Airport

These adverts seem to cluster into three groups, those that draw lines of reassurance from the past into our present, and by implication into a comfortably recognisable future; those that assure timeless worth through the scarcity value of the materials from which they are constructed; and those that thrust with the confidence and bravura of jet-engines, or fast cars, into a positively exciting future. The designs follow suit, with the first type all looking like bizarrely overcomplicated Victorian scientific devices (usually with a hint to the nautical) that I would have thought only Hollywood, or Tim Burton, could conceive of; the second type forming themselves as miniature display cases designed to show off their burden of diamonds or even, as above, their weight of genuine moon dust; and the third uniformly composed of two ingredients -although at varying quantities, these being the angular implication of movement and speed taken from the silhouette of a stealth fighter, and the massive punch and carved strength taken from the jutting profile of a tank.

With all of these posters, and in the building itself, there is a distinct lack of the kind of novelty and newness which was so prevalent in the Heathrow that I had just left. Even the posters of futuristic looking watches looked terribly obvious, old somehow, completely without any forms that might surprise, even in the slightest way. They are all about circumventing time, whether by being sure of the future through your connection with the past, through the assurance of a ‘timeless’ quantitative value, or through the confidence of a masculine arrogance; and all perfectly framed within a building that seems to be a fulfilment of all their promises, a fossilized but living nexus, unchanged in all its main elements, cared for and maintained as if it were intrinsically valuable, and still looking to a bright future from back at the apogee of the modern traveller’s glamorous past. Office building on the lake front

It was by parts thrilling and sad, I felt as if I were Donald Draper in MadMen visiting the city back in the day, bronze door handles, dapper suits and all, and the illusion only gets stronger if you are visiting as briefly as I did, and only have time for a momentary walk around the city, because its waterfront is clad in exquisitely maintained modern palaces from the same period, perfect boxes of Gordon Bunshaft slickness arrayed around the lake and the river as if they were counting down the days to their inception. Those buildings were thrilling, I could imagine the whole place like a little Florence of the 60s, but then accompanying these buildings wasn’t any art, decoration, invention or even glamour, just adverts and products like the kind below. Lots of little timelessnesses that can be melted down, and would either still hold their value, or be worth even more. 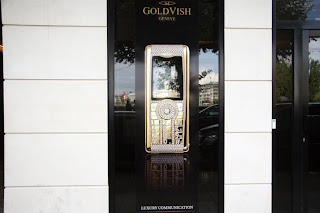 Posted by Adam Nathaniel Furman at 14:28