Some pictures of a couple of buildings by an architect in Provence, which we saw in Aix and Avignon, and who clearly wanted a bit of "Scarpa" in his works. 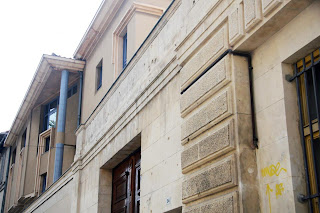 School in Avignon, unknown architect
The school above, which is in the old centre of Avignon, is difficult to find anything but painful, Banco Popolare Di Verona, Carlo Scarpa
however the apartment building below in Aix, is quite an odd pleasure. 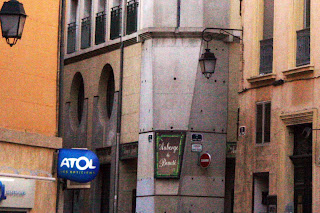 Apartment building in Aix-en-Provence, unknown architect
Walking around, and getting quite lost in the winding alleys of Aix, it was fun to have this building, bedecked with its little scarpa-esque ornaments, like cheap, but colourful costume jewelry thrown onto the most average of bodices, popping up every half an hour or so. It grounded that part of the town for us with the intimation of a sweet story about a young, provincial architect, visiting italy on a study holiday, and having been deeply moved by the Banca Popolare building, the Querini Stampalia, and the Olivetti Showroom, and considering it his personal mission to bring a little something of that magic back to provence. 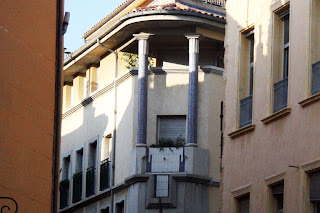 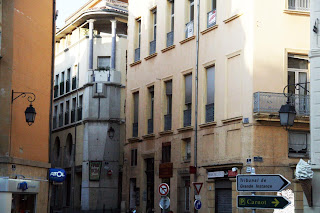 There was another building around the corner, much more recent, more restrained, and with a rather enlarged budget. It was in effect a handsomely proportioned French Town House, built in stone, but with hugely over articulated window frames, that geometrically followed through into the cornice lines, rendered in the typical stairlike, staggered, Scarpa profile. It was however definitevely less endearing for being so well finished, and so elegantly proportioned.
Posted by Adam Nathaniel Furman at 20:05