In a small square, Kalandeberg, in the old city centre of Ghent, Flanders, there is this fountain that I make a bee-line to whenever I get to visit that city. Surrounded by boutiques in what I presume are mostly death-masked buildings, faced by the outdoor seating of a Pain Quotidien, pressed to one side of the oblong lozenge that is the open space in which it sits, unassumingly silhouetted against the glow of a MaxMara outlet behind it, the fountain is surrounded by cracked concrete bollards, is grimy, quite small, and is obviously tilting and subsiding to one side since the water from its basin uniformly falls down into its lower catchment at one edge. Even the sound of its splashing is normally -during the day- lost under the romping screech of an accordian playing old neapolitan tunes for the benefit of passing shoppers.
Please go here for the full video as blogger cuts its width in half on this blog.
However for me it commands the square, and, along with George Minne's (unfortunately temporarily removed) fountain of the kneeling youths, George Minne's Fountain of The Kneeling Youths
marks the two poles of that sophisticated assurance which saturates Ghent in its own unique atmosphere of apparently frozen composure; a composure not of elegant display, rather the opposite, of a very spare and restrained matter-of-factness, in which everything from its infrastructure to its history, its architecture and aesthetics has been somehow pragmatised, somehow ironed free of all contradiction and doubt before they have been implemented and installed (or renovated). 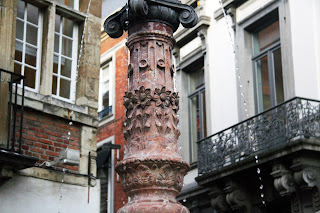 Everything is so confidently neat, and yet nothing feels forced, nothing artificial. It is a calibrated smoothness that seems to be balanced by, on the one hand, little un-problematic flourishes of sentimental exuberance and sensual delight, from the city's chocolates to the vivid ceramics on its town houses, and on the other hand, at the opposite end of the spectrum, by studied transgressions, by the precise and pointful constructs of the city's large art school, and the contents of its institutional art museums, which evocatively contravene and disturb the smooth trajectory of the rest of the city centre, perhaps therapeuticaly providing an outer edge for the bored to indulge themselves and their speculations in. Whilst Minne's fountain, with its idealised, sexualised, emaciated dream of suspended youth sits right at the heart of the city as its prime example of the second pole of Ghent's aesthetics, asking questions, demanding attention, and always deeply moving, the Kalandeberg fountain, resting in its little out-of-the-way square, is the period totem-pole icon of the city's little whimsical decorations, its tasty indulgences. 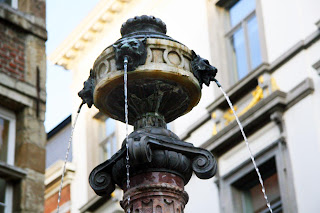 Never perfectly proportioned, the whole fountain is oddly balanced. But oddly balanced in an endearing way, like a house that has been designed to look cosey by resembling an old tumble-down farmouse, or to look like a building that has grown in an inexplicable, but happily picturesque fashion over time. It is a warm living room from the turn of the 19th Century compressed and piled up into an ornament for the city. 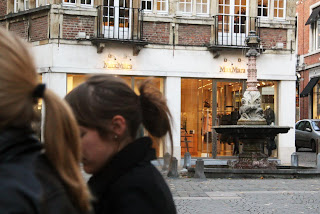 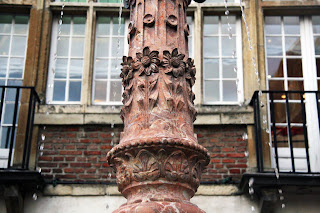 The column is too small, it is squat and inelegant; the basin and its feet are far too large and rise up too high; the urn is too high and spouts its water feebly, from four tiny spouts which can do nothing to stop the water being carried away by the wind. But the manner by which the elements have been joined together, by simple stacking, give them the unity of a still life, of a small collection, of a side table packed with objects placed on lace, and the materials with which they have been made, pink stone, alabaster, copper and sandstone, make them all look edible, delicious to look at as well as sweet. 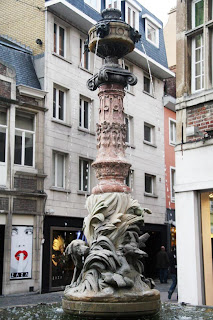 And the sculpture on which the column rests is just as sacharine, with an adorable dog caught in a perpetual chase around the circumference of the fountain after a fowl, a goose, and a duck. It is a sculpture of a kind with the sort of watercolours that would hang in any number of living rooms depicting hunting scenes, views of forests, a day out in country pastures; and the ornaments on the urn, column, basin and base are also of the sort that would decorate any number of Edwardian objects in any amount of living rooms, with their heavy, unmistakeable forms and clear, direct symbolism. 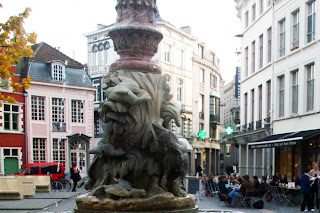 It is not an object for contemplation, and can hardly be called a relevant object for the city today, and yet, like Proust's Madeleine, it seems to be a little portal into tastes that encompassed a style and way of living whose residues, like the remnants of Horta in Brussels, have mostly been flattened out in the current city, while their current equivalents -the median household's patch-up of ikea and retro bric-a-brac- lack a comparable physical representative.
Posted by Adam Nathaniel Furman at 15:37