A couple of signs from Soho. Firstly one that sports a message that I wouldnt envy any graphics to have to convey in our current organic-fair-trade-minded delirium. In fact its just next to the Third Space, the uber trendy gym attended by no less than Madonna, and around the corner from the wildly expensive Organic super market Fresh n Wild, but by virtue of being a few metres closer to the student-trip tourism of Picadilly Circus, it stands a fighting chance for customers against image dinosaurs like KFC, Garfunkels and Adam's Ribs. I however, even though I walk past it probably every other day, had never noticed it as I generaly switch off my observation skills as I pass down from Brewer Street into the maelstrom that is the Circus, and only ever turn them back on again either once in the tube station (a very beautiful one I might add), or have crossed over into Lower Regent Street, past Lillywhites. 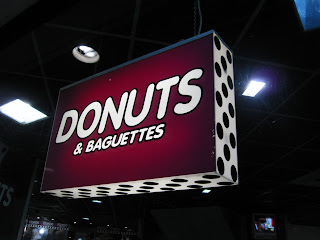 So I had missed the unique combined selling point that is this fast food joint which peddles DONUTS & BAGUETTES. It is like a couple of friends sat down, looked at how many student groups would be flocking past the site everyday (it sat opposite what was London's largest budget hotel until it was demolished recently), and, pointing out to one another that most would be coming from either North America or Europe, thought to cover the two regoins with respectively pan-continental dough-products: donuts AND baguettes; win win. Sealed with a snazzy looking dough-like font on contrasting candy-coloured background, in front of a pattern of abstracted op-art dough balls, lit by neon, the message zings in mighty defiance to the vast luxury hotel and retail project going up across the road, in place of the grand old Regent Palace Hotel. 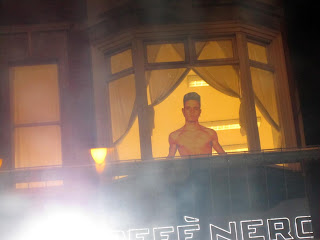 Secondly, just above Cafe Nero at the start of Hanway Place, on the north side of Oxford Street (also being mightily redeveloped), there is an office of some sorts that has decided to print out a larger-than-life sized cardboard cutout of Brian Harvey, of East 17 fame, at his skinniest, and place it just behind the bay window, so that he leers over Soho St across the road, glowing with a weird neon halo from behind, and lit occasionaly with strobe-like flashes from the buses driving in the road running alongside him. The office seems to be empty apart from him. Perhaps they left one last resident to stand in protest as yet another block gets requisitioned for demolition by Crossrail? Oh well, "Let It Rain".

Posted by Adam Nathaniel Furman at 06:34