Next to a business park, by a motorway, on the outskirts of Aix-En-Provence stands the somewhat dilapidated Victor Vasarely Foundation, a giant shed of a building surrounded by struggling lawns and a rather forlorn looking 'reflecting' pond that looks like a paddling pool from Pripyat. 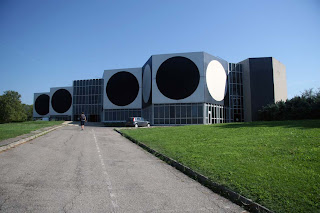 Victor Vasarely, helped along by his origins in graphic design, had always believed in there being a natural relationship between Op-art and architecture. He managed some other experiments on that scale, like "Le Ciel, Le Mer, La Terre' in Monaco, but here, in his own foundation he set out to start exploring the relationship between Op-Art and Architectural Space. In the strong Provencal sunlight the facade is on first glance strangely flattened, but starts to alternately jump out and recede from you, depending on how long you look at its black or white elements. It is a subtle, tentative breaking down of form in space, via our optical perception, later directly picked up in more flamboyant, but entirely derivative fashion by Fernando Peixoto's Brazilian towers. 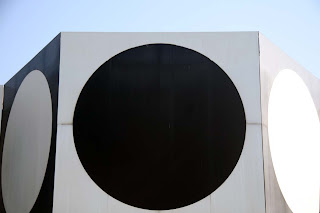 The plan of the building is a collection of Hexagons, the corners of which are cut off (seen below), an omission which acts as circulation, and links the spaces together. Because of the missing corners, when standing in one of the tall hexagonal rooms, you can always see through to several other rooms at the same time, and like colour-drift within an op-art painting, the large installations in the other rooms mingle at the edges of your vision with the colours and patterns directly in front of you, affecting one another and concentrating detail at the periphery. This overlaying turns spatial depth, and perspectival scale, into methods of enriching the experience of moving through the place into a chromatic kaleidoscope that shifts depending on what is closer, further away, at the periphery, or in the centre. 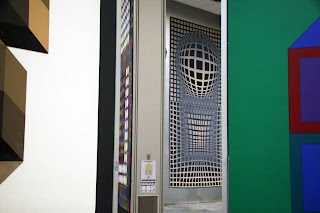 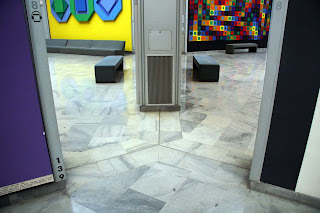 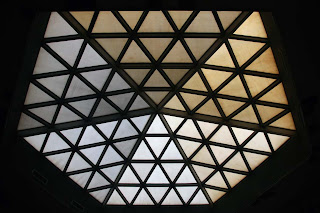 The division between the form of the space (the extruded hexagons), and the planes on which the works are placed (the surfaces defining the edges of the hexagons), acts as a 3 dimensional structure of relationships between the installations. The arrangement adds a scale of optical structure that functions similarly to the grids and radial organisations in Vasarely's individual compositions, but here with whole compositions taking on the roles normaly held by blocks of one or two colours. The dynamics of chromatic and optical movement in his paintings, which is brought about by the shifting of the eye across patterned and distorted 2 dimensional surfaces, is here being embedded within a broader spatial choreography that uses the roaming of the body, together with the wandering of the gaze, to turn his aptitude for coruscating effect into a more bodily, immersive experience.
The form of the space itself, however, always remains an agent of structure, always stays at the level of the unfilled, undistorded grid that lies behind the agents of effect, ordering and setting relations between what is within itself, but never quite taking part. 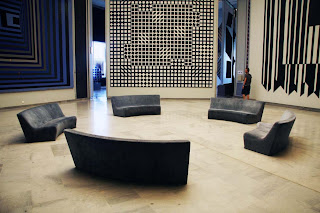 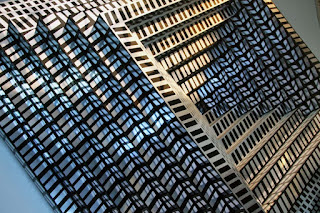 But there are great moments, like the one above, where there is a hint of what it might have been like if Vasarely had totaly broken out, with his optical distortions, from the two dimensional (transforming the body of the spaces themselves), and launched into a deeper experimentation into the relationship, often tense, and perhaps too tightly defined in the foundation building, between form, pattern and colour. There is an antinomy between the three, often extrematised when it comes to architecture, where they each seem to have worlds unto themselves, which seem irreconcilable, with clear internal logics that completely contradict one another. But occasionaly, when they come together, the most gorgeous things can happen. Perhaps Vasarely, like all the Op-artists, was trying to be too scientific about his work, and perhaps by the time his meticulous research reached the topic of form, there was no time left for the life-time's worth of painstaking analysis that he would have demanded for it from himself; and so what we are left with is a proto-Op-Art Architecture, a careful composition of dizzying 2dimensional planes, set off by the occasional sculpture, which hints at the fun that might have been; and everything together, architecture, paintings and all, falling apart, peeling away. 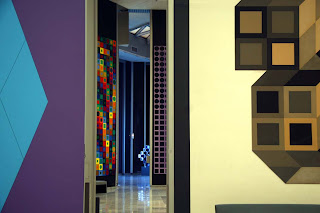 Although the building is not in the best of conditions, at least it is open, which it hadnt been for some time in the 1990s, following the 12 year presidency of the Foundation by Charles Debbasch, a French Technocrat who allowed it to fall in to disrepair whilst embezzling funds and stealing artworks, crimes which led to his firing, subsequent flight from France, and which eventually helped fund a coup in the Republic of Togo, in which he took part, and consequently now enjoys a senior government position in the West African state (perhaps he just cant stay away from strident patterns). It wasnt just him, but apparently also many members of the Vasarely progeny stole from the collection, one even being arrested on the job in a storage facility in Chicago, leading to court battles and a final decision that his grandson Pierre Vasarely take control of the estate, which is now being slowly (very slowly) rejuvenated. 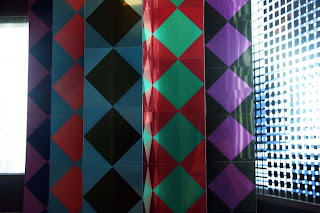 Posted by Adam Nathaniel Furman at 08:50