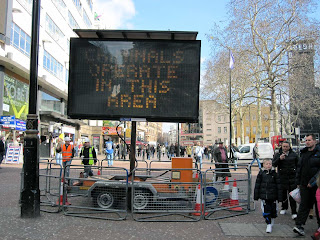 Warning of the amorphous and shadowy presence of some sort of unspecific, generalised "criminiality", out to get whatever you consider to be valuable in the space between your flesh and your outermost pocket, the sign (one guesses) is supposed to increase the reach and efficiency of the law through public awareness and vigilance. But because it looks like it has been hastily left by the retreating side in a battle of which there are no traces, like an apologetic warning to initiate self-policing from the government of some occupying power being forced to withdraw, instead of instilling communal self-policing and confidence it is unintentionally pathetic. 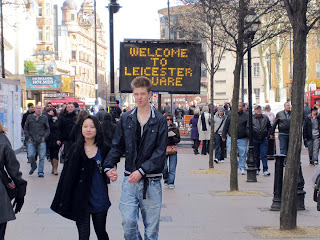 It doesnt have the sinister gaze of the discrete observer that shrouds cctv cameras with their very particular aura of malignant control, and singular purpose; instead it has the rather sad aspect that comes from a sign which is attempting to do something as serious as control criminality, but is having to nonetheless balance this with the role of needing to welcome people to an area, to somehow positively represent that area, to efface itself at the same time as pronouncing itself, hence the "WELCOME TO LEICESTER SQUARE", then the dire warnings, put as neutraly as possible, like the traffic-jam signs on motorways that tell you to drive carefully when there is no information to relay, and finally the ambiguous "HAVE A SAFE NIGHT", not "HAVE A LOVELY NIGHT" or "MAKE SURE YOU HAVE A SAFE NIGHT OR ELSE: ITS UP TO YOU!", but the rather sweetly confused median. One feels for the sign, it doesnt know what it is, it is pathetic, and Kawai, sweet. 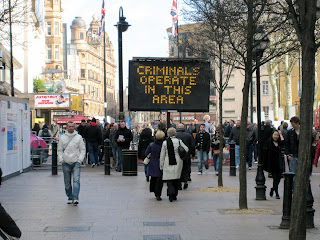 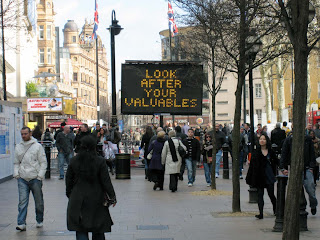 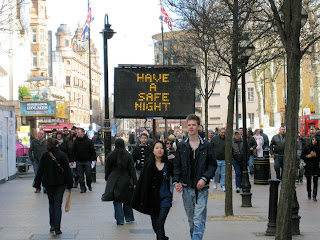 I wonder whether it ever has other messages posted on it from different governmental depts or the GLA, perhaps like "Welcome to leicester square; the food served in some establishments here has been proven to be detrimental to your health; Order with caution; Have a healthy evening".
Because there is something so forlorn about the wheeled-in sign, with its little guardian sentry rails that allow it to conform to Health and Safety regs, and its confused task, I wonder if it could be brought to life and given its own sad, pleading personality, like a very British Marvin The Paranoid Android in another guise, or a more down-to-earth, london 2010 version of the Highway sign in LA Story that instead of helping out like a post-modern benevolent techno-god, here looks back at you from the works of man and offers up a confused and pitiful mirror, in LED and aluminium, for your own relationship to the city around you.
Posted by Adam Nathaniel Furman at 09:52