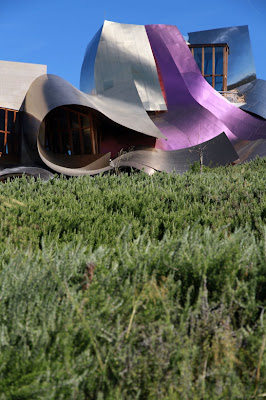 Gehry's Hotel Marques De Riscal in Elciego, La Rioja, gives plenty to its surroundings, lots of floaty-lite shiny pretty purply wavy surfaces of ooooh so lovely titanium that glint in the sun and reflect sunsets and glitter at night and stuff like that, and which also -by an incredible sleight-of-hand- simultaneously imprison its well-healed guests in a cage of mad steel beams that stab mindlessly in every direction, sticking into the body of the place like pins into a vodoo doll, whilst also managing to -almost- completely hide the remarkable mediocrity, the total early nineties "rent-a-plan" banality of its interiors. 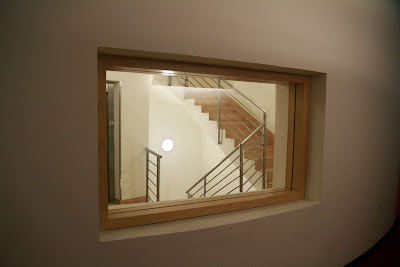 Perhaps this is an ironic double reflex against the pretensions of the guests and the owner? The empty heart of the icon and the wealth it carries... Perhaps its confusing array of wavy corridors that leave you disorientated not because of any crashing forms, but because of a total lack of any distinguishing mark, together with their alienating in-between spaces populated with Gehry furniture that no one will ever sit on, perhaps they are a 21st century take on Kafka's institutional interiors, but here being an analogised space of global abstraction and endless seriality, which on purpose leaves the occupant lost with an overwhelming sense of sickening deja-vu. 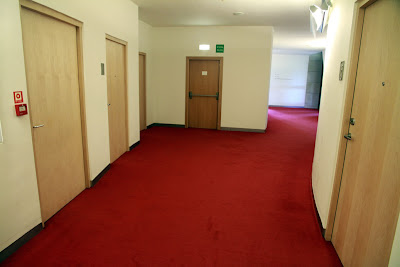 Perhaps, but really its that Gehry must have only ever looked at the pretty sexy model from the outside, and thats where all the money went (the budget for this was around 100million euros, a comparable amount to the bilbao guggenheim). The interior is detritus, the result of a struggle to fit all the program in between the wavy-wavies, while still adhering to Spain's building regs. 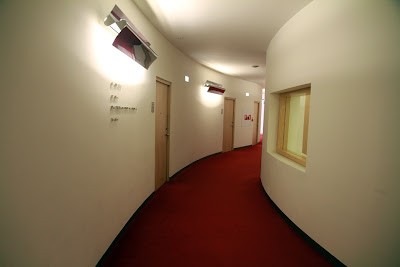 In case you ever get lost -which I guarantee you will- there is always a handy scribble neaby, blown up to A1 and framed, to remind you that you are in the result of a moment of genius, from the mind of a genius, and that the sinking feeling in your stomach as you pass another huge window overlooking another bunch of steel beams, must actually be a conceived part of it, must have been intended, otherwise it might mean either that you cant comprehend the immensity of his genius, or its all a ridiculous joke that you, sucker, wasted 300 euros on, and either of those options is best pushed to the back of the mind. For now. 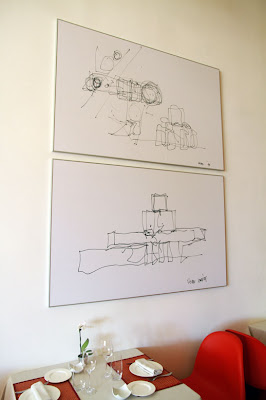 Thankfully, underneath the hotel, in a huge hidden sockle, are the wine-making facilities of the Bodega, where some real doing goes on. Some hardcore aging, bottling and packaging of around 6million bottles a year of that great stuff, Rioja wine, which (if you can drink enough of it, and perhaps mix it with some of the fortified stuff) can easily and surely take you, and whoever is drinking with you, to an equally curvy, and far more exhilarating place, wherever you happen to be, than the preposterous one squatting above the workers and their wine, like some colossal dead beached whale covered in carnivorous beatles. 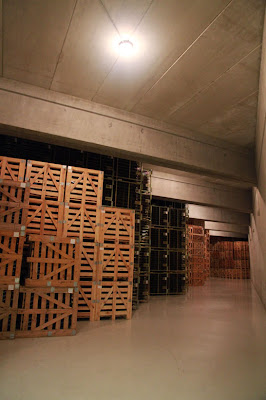 And nearby is the Vina Tondonia by Zaha, a forlorn "building" whose spirit is definitively broken, its amazingness left behind in a thumbnail somewhere on some design blog, archived in January or February 2009. 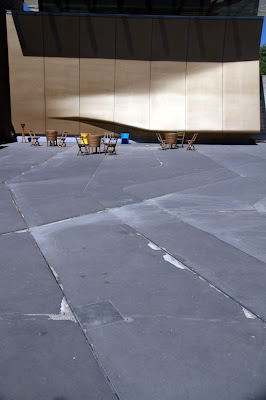 All thats left now is what looks like an unused car park, but an unused car park with markings that would definitely not help any car park, or do anything, except, rather excitingly after a couple of minutes trying to figure it out, realise that they all eventually line up with the lines on the building's facade. Amazing! 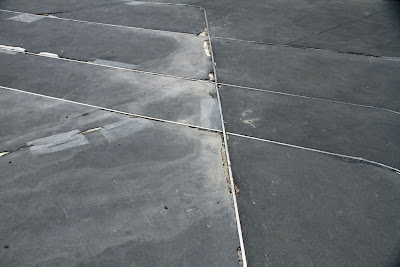 I dont normally care much about details, but when the structure of the building, and the panels of the floor are so proportionately unfit for showing the items that they were intended to display, pushing them to the periphery, stacked any which way and in any awkward corner, 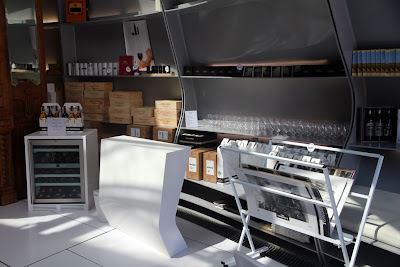 the situation tends to bring the details out to the fore, as a possible saving grace. Perhaps if the space as an object were beautifuly resolved, one could somehow forgive it being so resolutely unfit for what it was actually meant to do as a wine shop. Needless to say nothing was saved, and there was little grace creeping up between the yawning gaps in the floor, 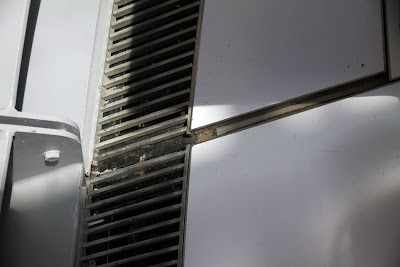 or falling from the shattered glass of the rain-proofing canopy -which according the the staff, allegedly shatters again every time, soon after being replaced, and allows water through; 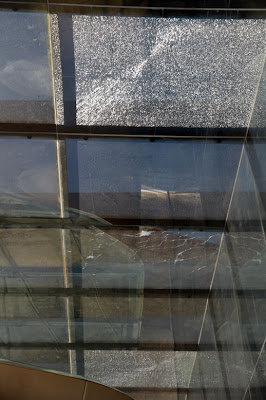 and there definitely wasnt enough space for any saving graces in the miniscule room for the three staff members squashed in the back, who apparently cant move their elbows freely for want of knocking into each other. 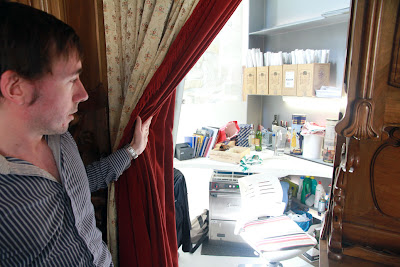 However there might, just possibly, be some of the stuff slipping off from the corpulent facade, and down into some colourful signs that at least there are some children in the area who like spending time around the place. 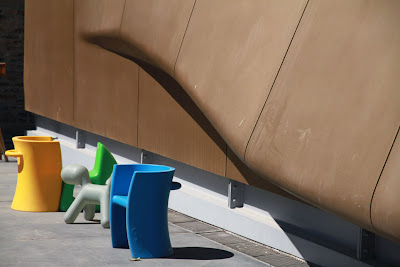 The guy working there at the time was quite up front with us, saying that the owners had wanted the building to be a billboard, to bring people in, and that despite certain grievances with its high cost, and with the practicalities and condition of it after only four years, they were pleased that it was indeed bringing international visitors to their bodega. I couldnt help shaking the feeling that if a building's main purpose is to be a billboard, it should perhaps be more eloquent, or at least louder, and less, well, shabby. Gehry should have done something here -the interior almost not having a purpose- and zaha, judging by the luxurious LG Hi Macs perfection of her floor at the Hotel Puerta America, should have hopped over to Elciego.
Posted by Adam Nathaniel Furman at 12:45