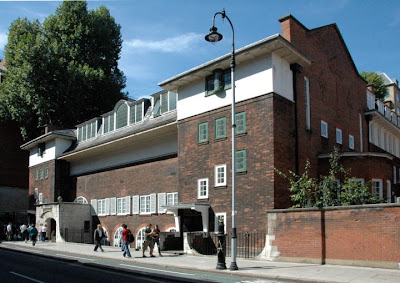 ^ photo by  George P. Landow
I visited the Mary Ward Centre (previously Mary Ward Settlement) during London Open House. It was a socialy radical experiment spearheaded by the writer Mary Ward, one of those great late Victorian women who, like Dame Henrietta Barnett, the founder of Toynbee Hall, and builder of Hampstead Garden Suburb, combined in one great personality the strong conservative, religious and politicaly reactionary beliefs (Ward was head of the Anti-Suffrage league) of a lady of the empire, with a vehement moral outrage towards the rather despicable condition of the poor and underprivileged in society. She actively put into practice unusually progressive social principles in the settlement, however they were always orchestrated with typically rigorous Victorian ethics. The local population, of all classes, paid a small sum, and through the settlement had access to free legal representation, a library, music classes, concerts, training facilities for the unemployed, after-school care, as well as England's first school for physically handicapped children. The tension between upright order, and creative flexibility, between ancient tradition and equality and free will -so characteristic of Britain at the time- plays itself out as much through the architecture as it did through the services the building provided, or the character of its Grande Dame. Barely eight years after the publication of News From Nowhere, and built the same year as Ebenezer Howard founded the Garden City Association, the settlement was one of the first practical steps taken towards realising the utopian values of the Arts and Crafts movement in the civic, and particularly, the urban realm. Arts and Cratfs architecture had been almost exclusively private country houses up to that point, and the following Garden City developments by Unwin and Howard would be essentially anti-urban, diluting the city into a an endless quasi pastoral landscape, but the Mary Ward Settlement was placed in the heart of London's dense, crowded Bloomsbury, right near the intelectual hub that was UCL (Mary Ward's circle was a precursor to the later Bloomsbury set), serving the existing situation rather than running away from it, or trying to build an entirely new one elsewhere. 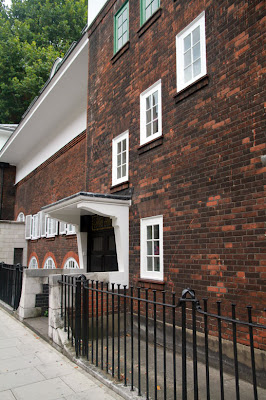 It makes me wish that more architecture like it had been built in London. The way it sets up its own symetrical monumentality with its two corner towers and central range, and then proceeds to joyfuly break it down means that the building both has its civic, formal presence for the wider street, but dissolves into a dynamic collection of distinct facades as you walk around it. This happens because what would usually be the focus of attention, the central wall and huge overhang, are here left blank, whilst the peripheries are busied with decoration (a pagan tree of life motif, in brick relief, decorates the southern elevation) and compositions of small windows. Important openings are also uncomfortably crushed up underneath the eaves (they even look like Palladion Windows with the central arch cut off by the roof), lifted up into a massively top heavy inhabited attic, and pushed down to the lower ground floor, just peeping up above street level, again moving focus away from the unity of the building, the breaking up of which is completed with the off-centre entrance pavilion in Portland Stone. 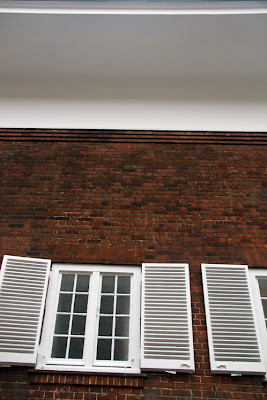 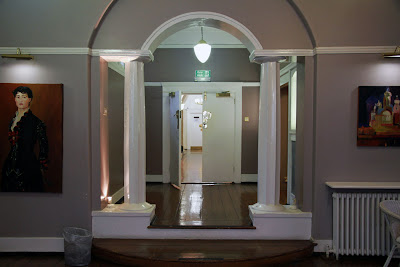 Inside there are similar techniques of compositional juxtaposition and interpenetration. Each of the walls of every main room has its own classicaly or country-cottage inspired decorative scheme, which usually does not match up with the scheme on the neighbouring, or opposite wall of the same room, each of which houses a fireplace, a nook for sitting, or a wash stand, so that the room is not only visually broken up, but actually pulls activities towards each of its sides, as if each of the walls belong to separate rooms that were all turned inside out to make a new one. 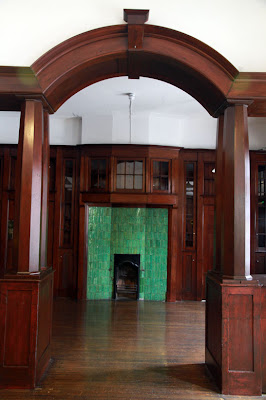 In the larger rooms the recurring Palladian Window motif of the building is used to further divide the space by spanning the whole of one side of the room, partially separating, but also framing a subsidiary area. 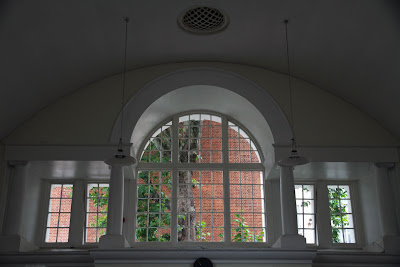 These Palladian Windows appear all over the place, being a clear and constant reminder of the building's relationship to the past, a double sign of fidelity and freedom. They are played with in a way that couldnt say more clearly that while they are a classical trope, they are entirely at the service of the architects and the effects they want to achieve, being variously stretched, squashed, simplified and elaborated, depending on whether they are being used as dormer windows, partitions, doorways, furniture, and whether they are meant to convey a sense of grandiosity and weight, mark the depth of a wall, or celebrate a spatial transition. The same goes for all the historical allusions whether reffering to country vernacular, Queen Anne or Palladianism. Nothing is used slavishly or in an Academic manner, it is all reformed and reconstituted, transformed, distorted and joined together in a technique which treats History as a creative process, rather than as a sequence of either contextually contingent singularities, or as a set of virtually inviolable precedents. 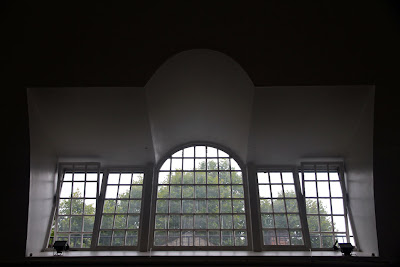 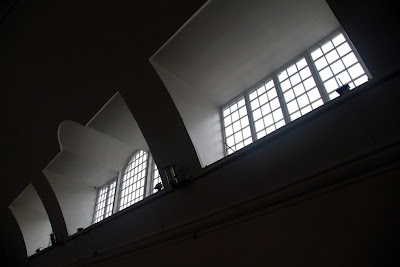 The largest space, for concerts and music classes is a large barrel shaped room placed on the top of the building. Its height, and the high positioning of its windows, is how the architects got away with the large area of blank brick and render on the facade facing Tavistock Place. On three sides you have variations of their Palladian Windows, while the fourth has the stage which looks like a structure assembled within the great tubular room, a pile of cubes containing the stairs in and out, and a hidden raised choir stall, again composed as a distinctly separate entity within the overall space, and oddly looking like the front of the Sphinx with its head and shoulders lopped off by the ceiling. The overall effect is similar to the Refectories or Dormitories of Romanesque abbeys, where a large barrel vault often has staircases and a room built into them at one end, like this one here in Thoronet. Like most places in the building, The hall is reached by two small, winding staircases that emphasise the sense of arrival, and taken together, as you move around the building through all the thin top-lit corridors, through rooms that can only be accesed through other rooms, and other staircases, you lose your orientation, and it begins to feel like an endless three dimensional labyrinth. 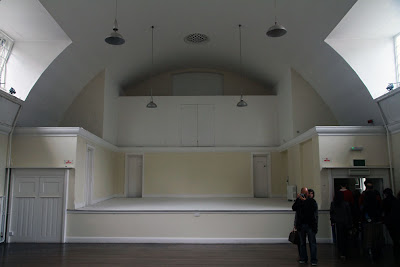 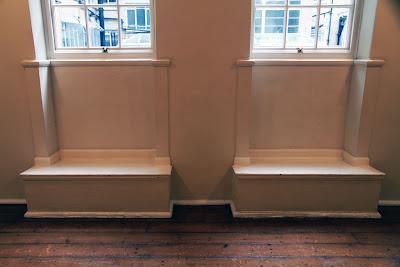 In many of the places where there is a punctured thickness to the walls, there are seating areas, either looking like abstracted thrones, or benches. In the photo below, there is some glass in the arch above the nook, which is an internal window to a corridor above, a trick that is used in several places, and which lets a soft glow of natural light into the corridor, and lets the occupants of the room see people passing by. 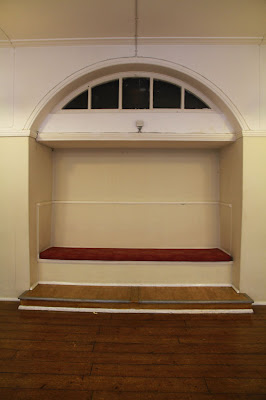 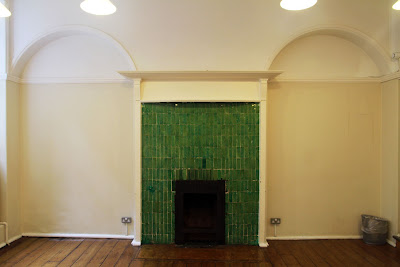 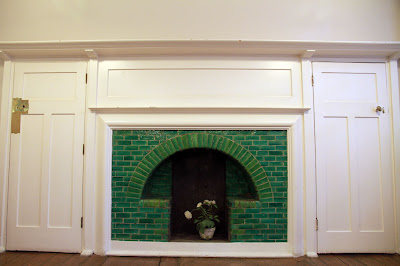 Now, although -to my great disappointment- there are no inglenooks in the settlement, there are five lovely (that i saw) bright green fireplaces, each of which was designed by a different famous Arts and Crafts architect of the time, all of them invited by the young Arnold Dunbar Smith and Cecil Claude Brewer to adorn their first work with a little celebrity touch. 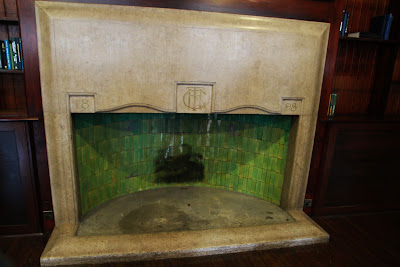 English Heritage never managed to definitively attribute them to their respective designers, so the game is left to us to discern the hand of  Lethaby, Troup, Voysey, Dawber and Newton (and nice link to the great Norman Shaw there, as Newton trained at his office) 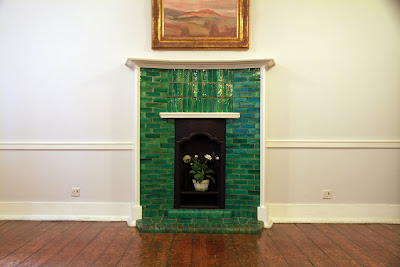 This is Arts & Crafts on a budget, and while most of it is really quite pared down and bare (a state of uncrafted nudity that doesnt suit this style, that relies so much on exquisite detailing, finish and craftsmanship, very well) there are some moments of beautiful joinery evenly scatted throughout, like the monumental cabinet below, with its squashed and stretched proportions. 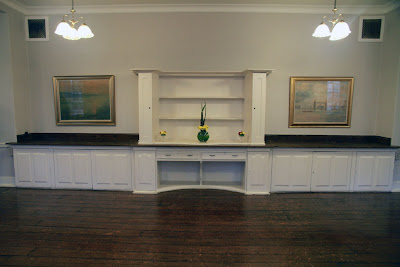 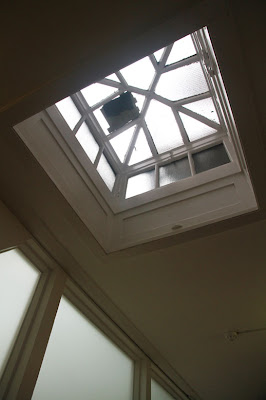 The photo above is of one of the corridors that wind their way through the building. The window to the side opens to a room below, and there are Soane-like lanterns placed often enough that there is always a gentle indirect light in these tiny, long spaces, so that while you are disappearing further into the labyrinth, you are always aware of spaces adjoining yours, and a can see up and out of the building. 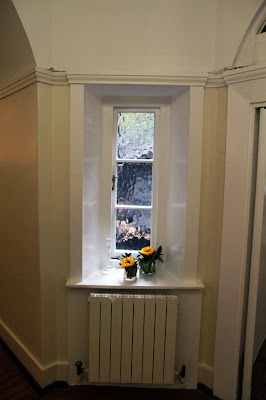 Wherever rooms open up into one another, there are small spaces that mark the event, above simply by cutting away the corner and opening a tiny window with a ledge onto it, which happens in a couple other places, and below with a pair of free standing columns, and little alcoves for displaying objects. 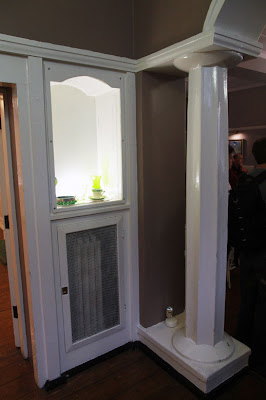 The same principle of celebrating, and using, the meeting of two spaces manifests itself in constant level changes between areas, normally only a step or two, but below rather grandly displayed as a little Michaelangelesque moment of one room literally spilling into another. 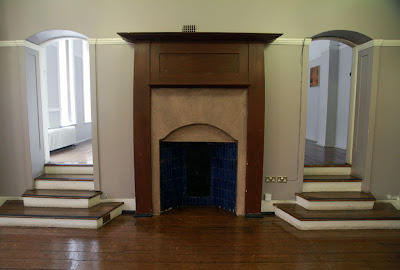 Its makes for a childlike experience of the building as a place to climb around, to peek around corners, in fact the effect of the breaking down of the building as a whole into so many small (and some large), composed spaces, and spaces within spaces, and winding stairs, corridors and rooms leading onto rooms, reminded me of how I used to experience large buildings as a child, never abstracting the place as a whole, as a coherent object, as I generally do now, but constantly lost in a cascade of separate moments that are discovered one after another, each almost forming a complete building of its own. 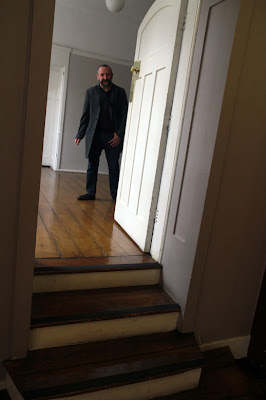 And to end -the North facade, again feeling like another building entirely to the west side facing the street, with the largest Palladian Window (the one in the music hall opposite the stage), and another strange set of tiny windows, that read instead as little solid bars, becoming a simplified entablature holding up the triumphal arch above. Go see it next September, its well worth the time. 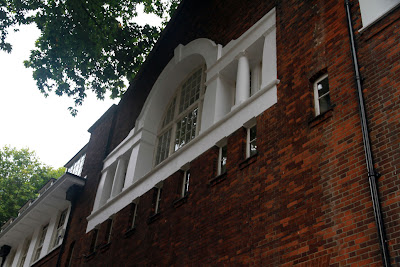 Posted by Adam Nathaniel Furman at 09:02