The Daily Express Building and A Papal Visit 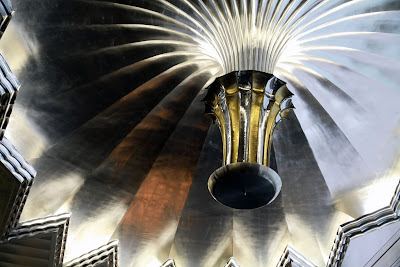 On the same day as London Open House the Pope was visiting the city to give a fantastically camp service in Hyde Park, although perhaps not as camp as this recent performance in the Luigi-Nervi reception hall in The Vatican. So as well as visiting the lobby of the Art Deco Daily Express Building, I went to see a bit of the Hyde Park hysteria, and stumbled into the anti-pope protests in both Hyde Park Corner and Whitehall. I bought some devout paraphernalia including a Union Jack with the Papal symbol on it, and a Pope badge, as well as later being treated to a free "Arrest The Pope" T-shirt by the protestors, which of course I simply had to join all together into a perfectly poised outfit that cancelled itself out, representing my slightly elated amusement at the whole shebang. Check out how painfully/amusingly low both sides slung with their rhetoric, encapsulated by Richard The Lionhearted Atheist, Mr Dawkins, in his speech to the protestors. I have issue with church-led state funded schools, a policy which blurs the line between religion and state, a line that in England and Wales needs to be rendered clearer and sharper, but I have absolutely no problem with the Catholic church and its followers per se. 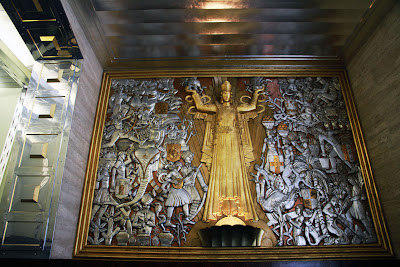 I probably have more issues with the silent monster that resides behind this spectacular stage-set lobby on Fleet Street. Goldman Sachs renovated the building a few years ago as their new European Headquarters, cleaning the lobby and returning it to its original state (minus all the hustle, bustle and activity), but placing it behind curtains that are almost always shut, contrary to English Heritage suggestions that the little 1930s costume jewelry box should be visible to the general public from the street. 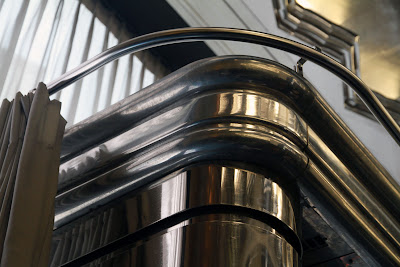 The whole space feels like being on the stage of a great, dancing, 1930s production on Broadway, everything glittering and reflected in chrome plate, silver leaf, and gilt metal, paper thin surfaces, and shallow reliefs organised in exotic motifs, all used to theatrical effect. 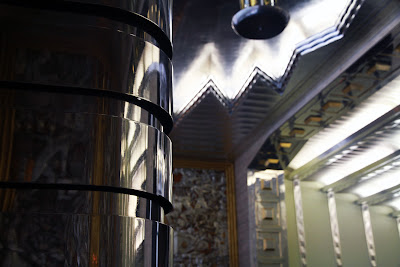 Its just so strange that this lobby, clearly meant to show off in a very public way, the open face of an old media empire, personifying its illustrious figurehead in the public's imagination, should now be shrouded, hidden away as the private accessory of one of the most publicity averse organisations in the finance industry, the company often seen as the faceless behemoth of corporate rapacity, harborer of an extreme form of singularly unproductive individualism. 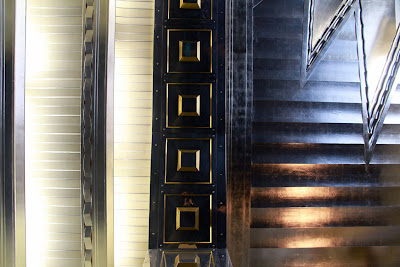 Anyway, it is/was a fun space, naive and silly as a carnival float, even if a bit sad in its current clinical emptiness, but still nowhere near as fun as playing the game of 'spot the funniest pope placard' that followed when we got to the protests. 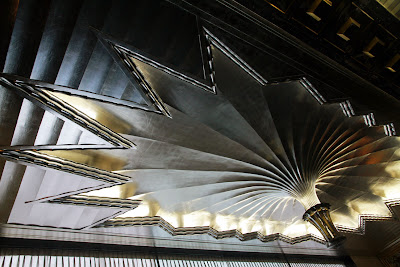 some of the protestors were intentionally humorous 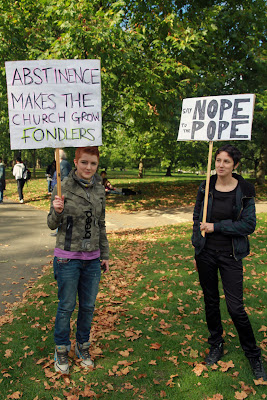 Others were themselves quite hilarious in their miscalculated ridicule, like below, the distinctly illiberal and repressive slogan for a march for 'liberty': "Dont like being laughed at? Then dont have such funny beliefs" 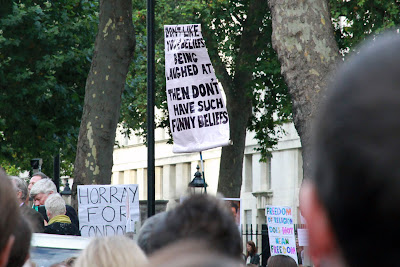 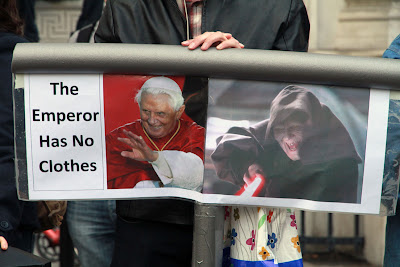 The best for me had to be the one above quite eloquently comparing the pope to the evil Emperor in Star Wars, and you have to admit that the similarity is both terribly unfortunate, and very funny. 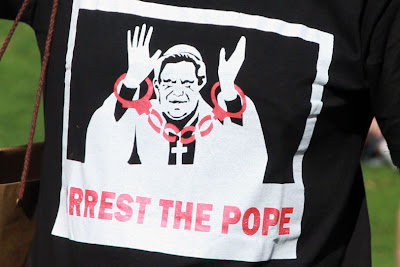