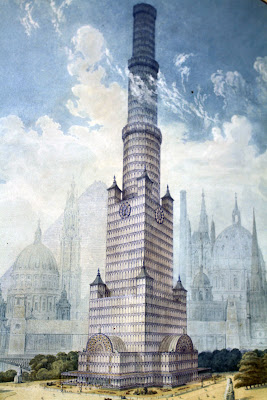 I went to see this watercolour render today at a viewing in Bonhams. It was a response by the architect C. Burton in 1851/2 to calls for ideas about what to do with the Crystal Palace after the end of the great exhibition. The design was published in "The Builder" in 1852. 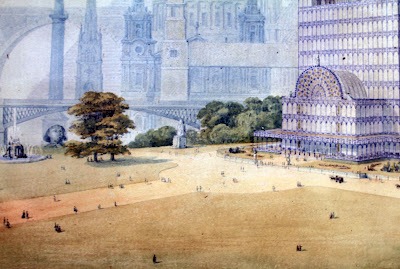 Dreamt up before the Eiffel Tower, the proposal was to turn the structural elements and glass of the great greenhouse by Joseph Paxton into a 1000ft tapering tower, for the purposes both of storage of items from the worlds fair, and for the delight and viewing pleasure of the public. In effect combining some of the era's encyclopedic hoarding tendencies, already evinced in the program of the archival Victoria tower at Westminster, and the period's equally prevalent leisurely frivolousness, here embodied as the sheer celebratory thrill of rising above your surroundings, a delight explored previously only in smaller dimensions at Kew's pagoda. 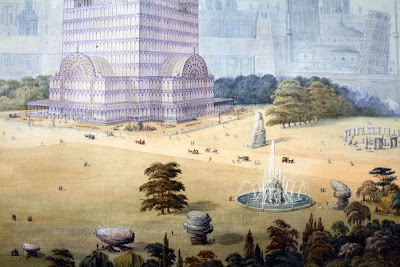 The archival tendency prevails in the setting of the tower, which interestingly is not situated in London, or any real location, but is set against a backdrop of the world's monuments, each receding further into the distance with some use of atmospheric perspective, and the tower's foreground is a sort of open air architectural museum, an artifactual pleasure garden filled variously with the Sphinx, Abu Simbel and Stonehenge, all of which provide a kind of historic build up to the great Victorian achievement which crowns and contains them all, the Crystal-Palace-cum-library-tower. The image has something of Joseph Gandy in its confusion of eras, but none of his sublime exploration of time and decay, or the vigor of simultaneity, this is all about collecting the past as you would souvenirs, somewhere closer to Pannini providing wealthy British aristocrats with paintings of Roman monuments clustered together in impossible vistas (get everything in just one painting: great value), so that in their new and upwardly mobile mansions they could display at once their knowledge and ownership of the past, but also their surpassing of it. 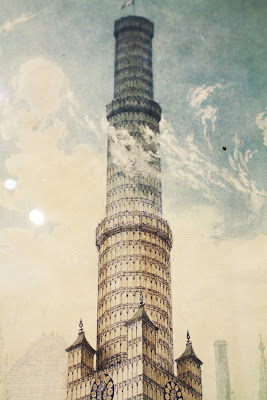 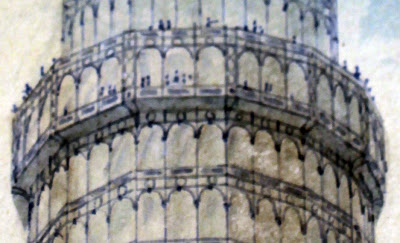 The tower itself looks like The Tower Of London sitting on top of the Crystal Palace crossing, with Victoria Tower sprouting out of that, and finally an industrial chimney popping up out of that and rising up to the full height (very British). It would have been 63 feet less than the Eiffel Tower, and just 13feet less than Renzo Piano's Shard which is currently going up in London Bridge, with which Im sure it would have made a lovely pair. 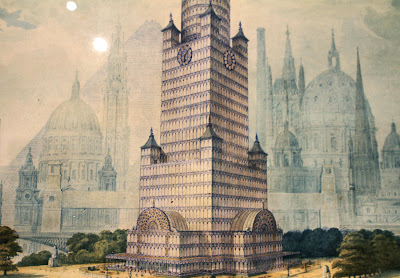 The background reminded me alot of the print below that I have hanging in front of my loo (which inevitably I spend an inordinate amount of time examining) that quite raucously details in elevation all the tall buildings in the world just prior to the advent of the skyscraper. Drawings like this must have been popular at the time and I can imagine Mr Burton designing his proposal with its towering and triumphant presence in a drawing such as this in mind; a collection of buildings -heavy and honorable- but with his lightweight recycled transparent confection soaring above, to be collected together and displayed in people's living rooms, all over Britain, and the Continent, and the Commonwealth... 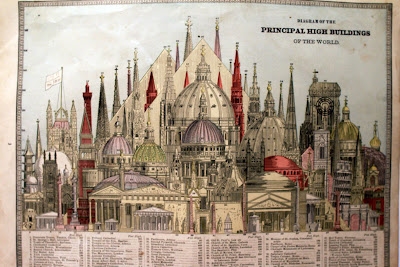 The sale will be on the 19th January, if any1 buys it please let me know!
Posted by Adam Nathaniel Furman at 19:05