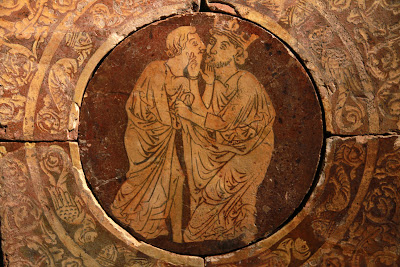 This is a round encaustic tile from a medieval English pavement. The sequence of images tell a story (apologies but I cannot remember which story... it involved a king. Duh), and are the earliest set of surviving figural tiles from the British Isles. Although the men appear to be, and are indeed kissing on the lips, this was a way of passing on luck, and wishing well, for a journey rather than any more Hellenic form of younger-older male bonding. 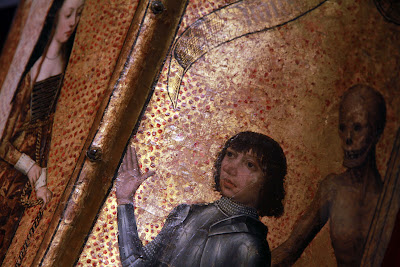 Rather more appropriate to ambivalent European depictions of love is this delicate, but morbid, depiction by a Flemish painter from the fifteenth century, of a knight courting his object of desire. Pallid and gaunt, looking as if they have a cold, red-tinged flesh flaring at their nostrils and the sides of their mouths, the pair are watched by a disconcertingly over-eager figure of Death, who is either a reminder of the folly of earthly passions, or a stark description of what will be awaiting the man should his entreaties be rejected by the fair damsel. Fittingly the whole thing is painted on the bowing shape of a ceremonial shield. 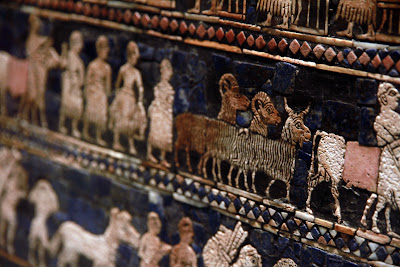 Above is a scene from an object tenuously named "The Standard of Ur" that has survived from the ancient Sumerian town of the same name, and was recovered from a large Royal tomb. Its surface is decorated in minute mosaics, and show on one side an image of "War" and on the other "Peace", the photo here being from the side of Peace, cattle, goats, harvest and all. 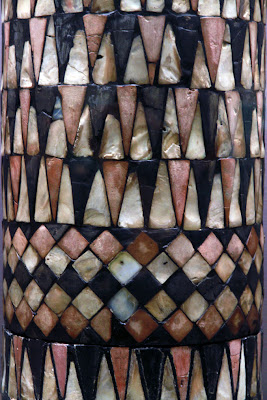 Also from near Ur is this 4500 year old mosaic encrusted column, one of several found at the site of a temple dedicated to the god Ninhursag. At its heart were palm logs, covered in Bitumen, and around which were attached pieces of mother-of-pearl, pink limestone, and black shale.  Each tessera had a copper wire passed through a loop at the back of it and the ends twisted into a ring. The wire was then sunk into the bitumen for attachment. When discovered in 1919, the archaeologists found that the columns were exactly the same diameter as modern petrol drums and so during reconstruction, sections of tesserae, held in place by bandages dipped in wax, were wrapped around empty drums to restore their original shape.


All these items are on public display, free of charge, at the British Museum
Posted by Adam Nathaniel Furman at 09:55