A short film, made of photos taken with my Canon 30D, showing some of the moments that struck me during an unfortunately short visit to this wonderful Abbey (one of the three Cistercian sister abbeys from the 12th and early thirteenth centuries in Provence). The spaces that can be seen in order are the southern aisle and the approach to the aisle's corresponding apsidal chapel, a small room situated a half level above the dormitory, the terrace area above the cloisters, the lean-to barrell vault of the northern aisle in the chapel, the nave, the Chapter-House, a nave-pier, the fountain positioned in the cloister courtyard, and whose roof can be seen as an hexagonal pyramid in the footage from the terrace, and final two exterior views, one from the south, and another of the exterior of the apse. The place had a strong influence on Le Corbusier, culminating in the realisation of the sublime La Tourette monestary designed by him for the Domincan Order. I will be going back at some point in the not too distant future to spend a day there, and hopefully an evening, in order to get a better understanding of its appeal.

The embedded video above is cut in half, to see it full size, go to the youtube page here

This is a photo of the corner of the dormitory -a long rectangular hall with a barrel-vaulted ceiling- in which a staircase was added at some point to access both the attic above, and an intermediate level in the adjacent structure, creating a rather dynamic, turning compression of penetrated solids pressed between the vault, floor and walls... 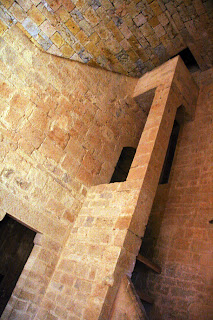 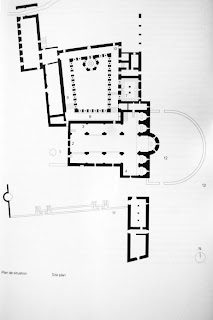 Posted by Adam Nathaniel Furman at 12:21