In winter the Old Port of St Tropez is like most other seaside towns on the Cote D'azure, with cafes facing the small boats moored in the docking area in front of the harbourside buildings. 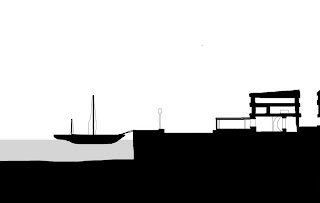 However with the advent of warm weather, and the arrival of the town's pyrotechnically wealthy summer residents, comes a transformation of the somewhat non-descript strip of road along the water. Similar changes must also occur in other superyachting venues, but the contrast between the sleepy, and admittedly rather drab banality of the area in its winter months, with the thronged spectatorship, and correspondingly ramped-up showmanship and display of its summer months is uniquely extreme. 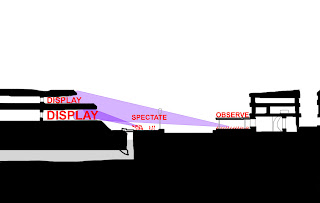 The huddled quayside buildings fronting the port are outshone, dwarfed, and hidden in darkness as all possible space fronting them is filled with extremely large yachts that are all designed either in an aggressively spectacular mode of shining white and dazzling silver modern, or in an outsized nostalgic mode bedecked with subtle curves and wood finishes; either way, both types are uniformly arrested in flashy illumination -uplit, backlit, toplit, lit-from-under-the-water- which, in combination with the open terraced design of the backs of these boats, insures that their occupants may be seen, theatrically framed and enlarged, from the port, turning the whole strip of the town into an inside-out amphitheatre, a vienna opera house of dancing millionaires, and billionaires eating nouvelle cuisine next to models, turned in on istelf, so that all the boxes are facing outwards, piled on top of each other like so many exquisitely crafted stages of theatricalised excess and privilege. 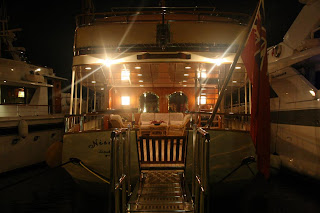 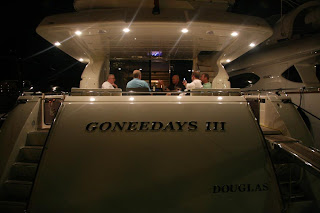 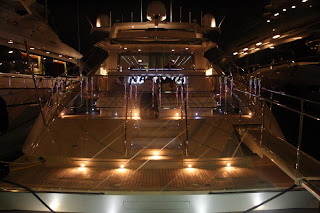 The cafes facing this inverted arena of stacked stages, having lost their view beyond the boats afforded by their winter absence, become incomparably more popular thereby, becoming hosts to packed audiences, who can both sip, and sup, while speculating on the origins and identities of the yacht-bound class, gyrating and guzzling and lapping up the attention from both the seated cafe spectators, and the incredibly numerous throngs pressing along the dock-front in order to peer into the realm above, beyond, but in clear sight, amongst the franticaly glittering lights, on the sparkling decks in front. 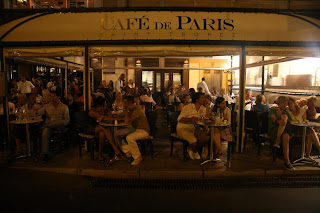 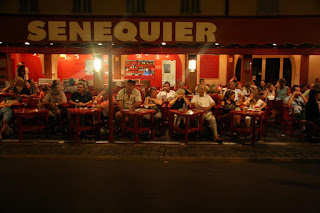 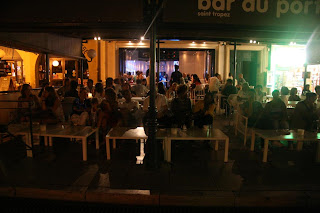 Posted by Adam Nathaniel Furman at 13:33