Toyo Ito does the Cote D'Azur

Having hopped onto a boat in order to overcome the slight headache of a hangover, as well as the nauseating memory of having been caught with Karl Lagerfeld in a small nightclub, together with his entourage (and the unpleasant zone of high pressure created around him by the desperate weight of people trying to take pictures with their camera phones, and perhaps, just maybe, say something to him), I spotted something across the bay. In my inability to quite properly tell if it was what I thought it might be, or whether perhaps it was just a doppleganger by virture of distance -a normal building impersonating a famous one- the situation seemed entirely suited to the area, this funny place where you constantly think people are famous, because they all dress to look as if they are, as if they are moving images from OK magazine, and somehow it is difficult to distinguish, as in the end everything and everybody is suffused with a warm glow of aloofness and celebrity. But occasionaly there are summits, points of notoriety that are known outside of the area, and which, like Karl Lagerfeld and (apparently) Leonardo Di Caprio, serve to keep the aura strong enough amongst the rest of the look-alikes, to keep them consistently levitated above the ground in the popular imagination (a sort of vote-of-confidence). Even if at first glance they may be mistaken for any other of the imposters, even often looking less the part than them for the lack of being as flashy or manicured, they rapidly stand apart as people begin to notice and smell the "authenticity", like when Chirac walked down the Port in his Hawaian shirt looking rather ugly and shabby, but as he walked, and people began to notice, rapidly attracted enough of a crowd that the traffic was stopped. It is these peaks of true notoriety that fuel the imaginative speculation which both brings people to St Tropez to see the famous, and which brings the wealthy to be seen, both groups being satisfied in that the people who come to see assume that everyone they are seeing must be "someone", and those who come to be seen, even if "nobody" are flattered by the deflected attention.

I was pleased to see as the boat drew closer that this was indeed a moment in which this principle had been transferred into the architectural realm. I was correct, and it wasn’t an imposter, or a fake, and as the low white box became a collection of dark and light triangles, it became clear that Toyo Ito’s Serpentine Pavilion had been brought to the for a touch of formal celebrity, a little moment of contemporary architectural glamour in the sun. Only there were no crowds taking pictures on their IPhones and body-guards keeping people at bay, just me with my camera. 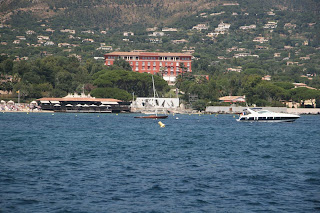 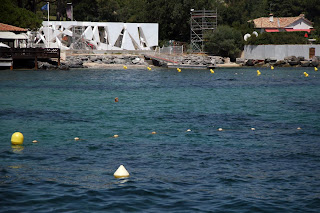 Posted by Adam Nathaniel Furman at 07:35