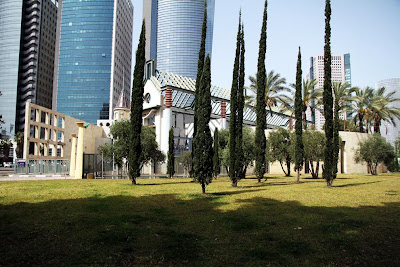 In the foothills of the new towers of the Kirya area of Tel Aviv there is this electricity substation, the more laissez faire city's PoMo reply to Jerusalem's solemn essay in origin editing, identity re-construction and aesthetic conflict resolution, the supreme courts complex by Ram Karmi and Ada Karmi-Melamede. 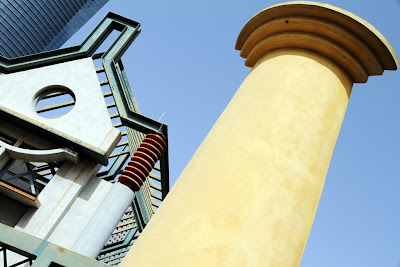 Whereas in the Jerusalem building every choice of material in the complex had to refer to a real and related geographic location, and every use of stylistic and symbolic quotation needed to be weighed carefully to be sure of its heavy symbolic significance in relation to the rest of the complex's elements, to its symbolic function, practical purpose and social resonance lest signals get crossed, and a tense public read it incorrectly; this little substation revels in the intractable mess it makes of its component references and materials, alternately looking like an inner-city prison, a temple, a casino entrance, a factory, and, well, an electricity substation. Its materiality is indeterminate at every point except for the steel gates, with the surfaces of the compound revealing themselves to be peeling in most places -the image of their substance coming off like spray-paint- whether or not they look like concrete or metal panelling from further away. 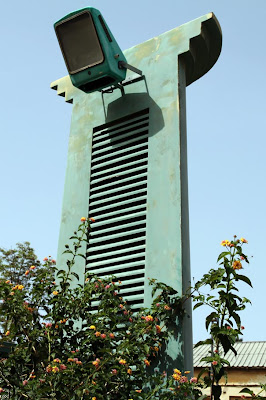 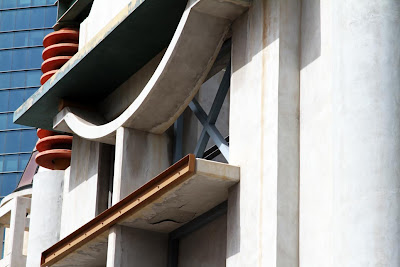 This building looks like a plastic-toy stage set with multiple audiences in mind (although its pathos is heightened by being devoid of any real audience, being as it is in a bleak and deserted post-market-liberalisation part of town), and in a world where almost any shape and colour can be made from petroleum based plastic products, with miniature buildings, toy space stations, medical equipment and shoes being formed from the same stuff, negating the importance of the origin of a material, as well as of the link to the forms which that material once necessarily took, and replacing that importance with the supremacy of the qualities and effects derived from that original material's transformation, and the allusive power of the form it finally takes, this little mess is an architectural reach in the direction of the power of the material-less toy. It is also oddly contextual with its peeling paint and abundance of totally arbitrary symbols, fitting in with Tel Aviv's 1920s and 30s modernist "Bauhaus" apartment blocks where shapes surge like steam liners, and desperately attempt to look like skyscrapers, whilst flaking away their plaster (meant to look like concrete) and revealing their underlying brick, breeze-block and gravel structures (meant to be reinforced concrete dom-ino). 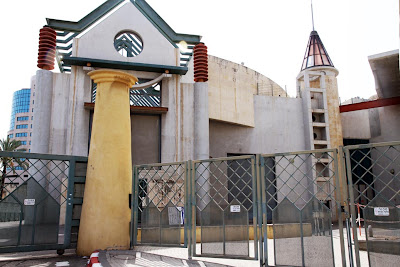 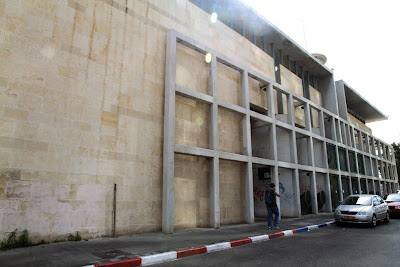 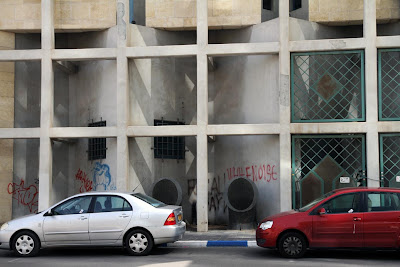 Its abundance of formal devices from its shifted grids to its "electricity orders", and its many faces as a visually playful urban object are unfortunately, like alot of buildings around it, means without any ends. It all seems like a lot of hard work for a project that got built, but turned out to have no client except a couple of  IEC employees, and the occasional architecture geek with a Canon. The space between the body of the offices and the street could have contained a lotto stall, a falafel outlet, anything that might have brought a bit of life to all the bizarre conceits, giving them more substance and enmeshing them in the everyday life of the area, although the fault might lie with the failure of the area as a contemporary urban development, being unable as it is to provide a sufficient flow of people throughout the week to keep shops and businesses alive. It is a bit like a built-in ornamental clock I once saw in a Covent Garden backyard, sitting at the top of a fire escape (which i believe was supposed to make the fire-escape tower look like a mini big-ben of sorts), which the builders had never bothered to put arms into, probably because they realised whilst installing it that it was an attempt at monumentality, without an audience for the architectural event. 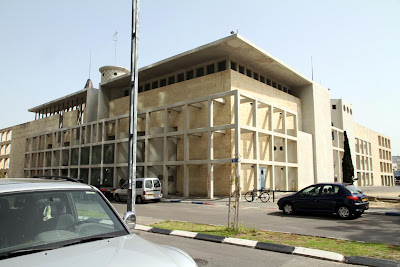 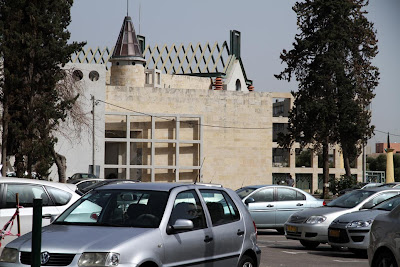 Most of the buildings in the area have a similar feeling to them, but none has had so much effort put into its design, the others being mostly faceted or curving curtain-walled office towers, and whilst gates stop anyone entering the interior of the substation, and the hum of electricity passing over transistors keeps the site empty of programme and activity, at least it generously offers up its visual stimuli to anyone who cares to notice it, marking itself in whatever public space there is between the highway and the security-guarded office towers. 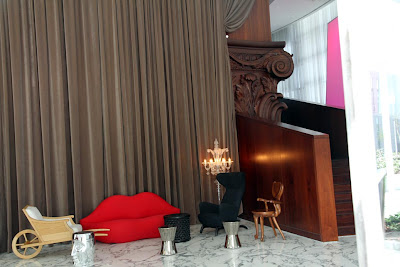 Anyone can walk up to it, and hopefully one day it will be turned into a complex used for various activities, sports or shopping etc, and stand in opposition to the new generation of buildings developing slightly further up the same road, exemplified by the Yoo towers by Phillipe Starck (lobby above, and part of the nightmarish Tzameret Park Luxury High-Rise District), where all elevations facing the city are reduced to joyless whitewash, and all design effort and money is lavished on the private space of the heavily guarded interiors, rendering the feeling of an elite form of luxury that is exclusive and hidden, all the more acute (and valuable). In a typical Starck tactic the lobby of the Yoo towers are hidden behind veiled curtains that only give glimpses of the dripping interior, and security guards that are dressed like bouncers make residents feel special and welcome, as anyone else who is a member of the general public is made decidedly unwelcome. All facilities that one could need are within the complex from convenience store to gym and health clinic, leaving the sign at the entrance to the compound ringing in one's ears like a sarcastic slap: "To Live In The Heart Of Tel Aviv". Below is a paired image, on the left is the street across the road from the Tzameret Development, with its open ground floors, adhering to the old city code, open to anyone, its plots densely packed with windows opening directly onto the pavement and passers-by, and on the right is one of the two monitored entrances to the towers, with its huge distances between plots, no relationship between public space and the interiors of apartments, and a windswept isolation that was only punctuated when I visited by the distant sound of a disembodied fight between a couple up in one of the higher floors, that sounded like it was getting rather violent; the squawking of some women and a couple of men who, dressed like Pamela Andersons and Russian gangsters respectively, were gawking at the enviable future they had come to admire; and the quiet rustling and door slamming of two men who appeared to be throwing unwanted kittens into a skip.

Posted by Adam Nathaniel Furman at 19:07