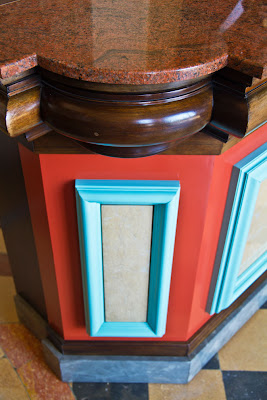 A genuine time capsule from 1992: the reception desk in a restaurant/hotel overlooking the city. The complex was built inside a 16th century monastery whose original frescoes and vaulting have been renovated inside in a riotous pink, aqua-marine, mirror, velour and marble take on what the renaissance meant for luxury clientele in the late eighties. It is aptly called the Villa Florentine after "Lyon's important links with that city throughout the Renaissance", with the building being "a tribute to that era". Its the Moore-like moments of madness that do it for me... at one point in a stairwell going to the toilets, a small army of entablatures peel away from the walls into the middle of the small space to become uplit chandeliers; Just visible behind them is a wall in the room adjacent that is covered in an abstracted black-and-white leopard print pattern, which rises up to a bright-baby-pink set of huge mouldings; and to top it off the staff are grumpy, and dressed up like characters from Babylon 5. 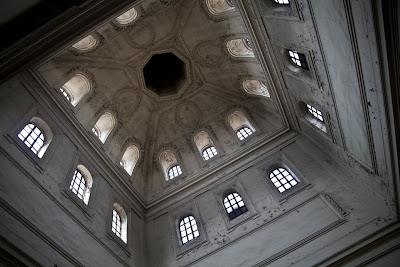 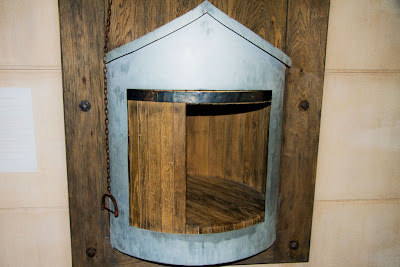 Working much in the same capacity as London's Foundling Hospital the Hotel Dieu would have small turntables like the one above in several places in the city, for desperate parents to leave the children which they could not afford to take care of. 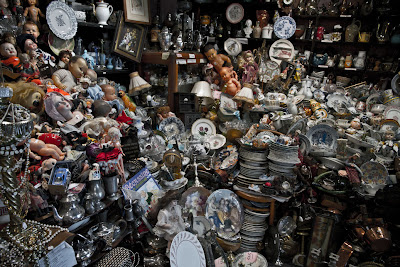 The interior of the Antiquites "Marilyn" on Rue Auguste Comte. The family who runs this shop quite clearly never get rid of anything, leading one to wonder how they know what is underneath all the piles of dolls and plates, whether things are simply compressing, cracking and folding into each other, forming little caves perfect for mice and 'borrowers', as stuff accumulates endlessly above. I wanted to see a vase that was somewhere up in the top left of the photo, leading to a scene where the lady attending the shop had to belly-crawl on top of all that porcelain, grab ahold of the shelves to lift herself up to the item, all the while telling me to keep holding up the mountain of plates with my hands and legs lest they all come tumbling down with her on top. Not the most efficient way of running the shop but quirky and memorable.
Posted by Adam Nathaniel Furman at 21:59