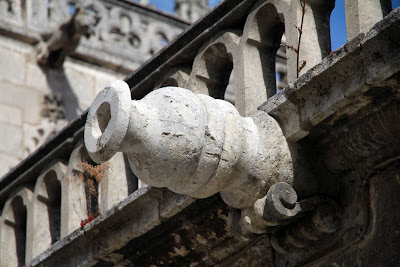 Santiago de Compostela is the wettest place in Spain, and proud of it too, with the Architecture making a feature of large, numerous and prominent gargoyles and spouts like the ones above and below. 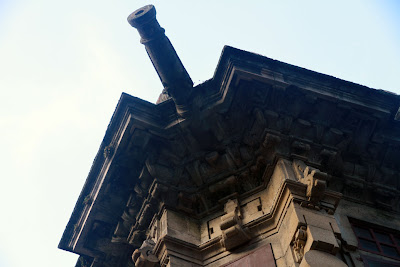 Apparently it is quite a fantastic experience to walk around town during a downpour, as torrents of water cascade down into the streets from these spouts like so many fountains. Of course the three days I spent there were unseasonably hot, with enrelentingly blue skies. Nonetheless I enjoyed imagining what it might be like, and looked up alot at the weighty layers of Churriguresque ornament that make up some of the cornices in the city centre, which together with their canon spouts tended to look like a fanciful fusion of the battleships and the architectural ornament from Giovanni Coli and Filippo Gherardi's similarly inventive, copious and gigantic fresco of the Battle of Lepanto in Palazzo Colonna. Below is the Western facade of the Cathedral of the city, and site of pilgrimage for St James, whose gold and bejewelled bust you can hug after queuing for a few hours. 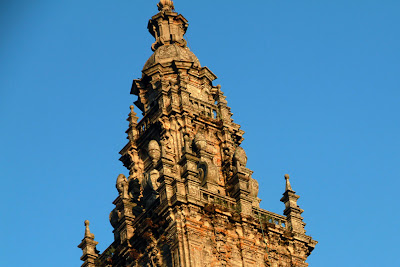 In front of it is a large square with one of the buildings facing it being a Spanish Renaissance Pilgrim guesthouse and hospital, on whose cornice I was enjoying some gargoyle spotting, since there are several large ones arrayed along its roofline, when I spotted this rather unecclesiastical gentleman below utilising his position to both attempt some auto-gratification as well as to present the hordes of spiritualy uplifted pilgrims who gather daily in the square with a lyrical transformation, via some deft figuration, of God's regular gift from the heaven's into what must be a positively transubstantiatory scatological installation. 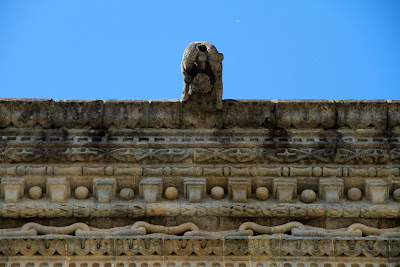 It pleased me no end that somehow this Galician stone-mason, 450 years ago, had used the effect of elemental subsumption that happens in the kind of ornamental proliferation that santiago is encrusted with, to insert something as humorous as anything found in Pieter Bruegel's drunken peasant scenes. Similar statues, although usually much smaller, were common in Romanesque churches, ostensibly as unequivocal warnings to the great unwashed of the dangers of carnal sin, as catalogued in the thorough book Images of Lust: Sexual Carvings on Medieval Churches, but for one to be placed on a building of this late a period, in this much of a prominent position, and of this size (the more louche were generally confined to smaller churches along pilgrimage routes), there must have been either a particularly lewd Cardinal who explicitly requested it during procurement, 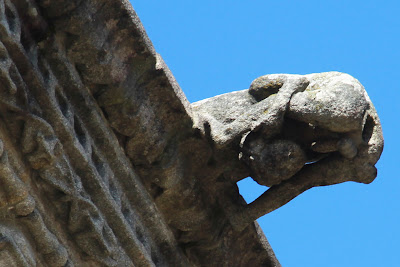 or else there was a roving Jean Genet figure amongst the numbers making up the stone-carvers guild, bent on celebrating through the bared body of a human being the ecstatic downward rush of water fast and away from the heavens to the soil, to turn the cathedral opposite upside down and inside out as his figure gazes reverently not upwards and eastwards, but is transfixed inwards, and projects downwards, gazing firmly at his own member whilst the length of his torso arks to release through the most profane of all body parts, away from the facade, the very stuff of life.
Posted by Adam Nathaniel Furman at 11:49