A Green Trick Around Planning Regs 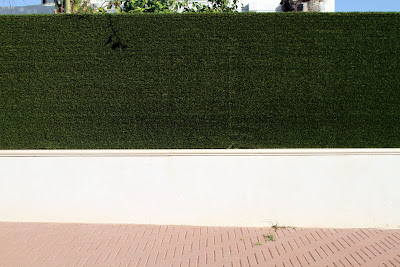 The planning regulations in this suburb in central Israel state that all walls facing the street at the front of properties must be a maximum of 80cm in height from the centre of the plot, with walls meaning permanent constructions, not greenery. 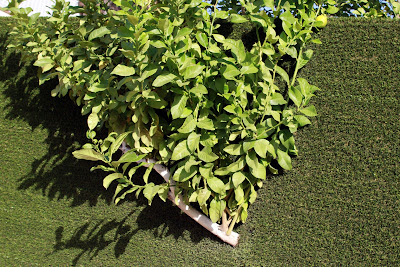 Now Im not quite sure how the family got away with it, but this house has a quite beautifully executed trellis covered in Astroturf that sits atop their regulation wall, rising in some places to over two and a half meters. They even neatly sowed the Astroturf up around any plants that had branches outside of the wall-line, kindly leaving a few lemons and limes as recompense for passers-by denuded of their right to see into the front garden of said plot. 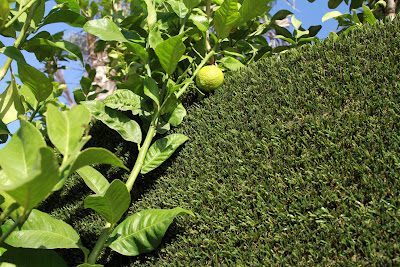 It has apparently been there for around a year now, so must have been tacitly accepted by the municipality. I guess the combination of its temporary trellis-like structural nature, and its saturated food-colouring green pigmentation rendered it far enough away from the material stature of your standard Israeli suburban wall to distract the council officers from the fact that it still does exactly what the planning rule had meant to avoid, namely stop the breeze flowing through plots, and block all visual penetration through the neighborhood. 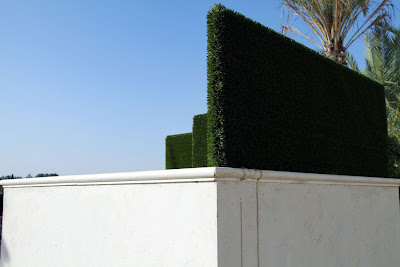 Still, having said that, and after the councilmen have wandered off pleased by the thought that really it is just another hedge of greenery, I must add that it is the most outstanding architectural element in the whole area. It shows the most ingenuity, wit, and playfulness with materials, and also reacts best with the blinding sun, to which it doesn't submit, but rather glows and radiates in a strength and vibrance that is in direct proportion to the aggression of the light. 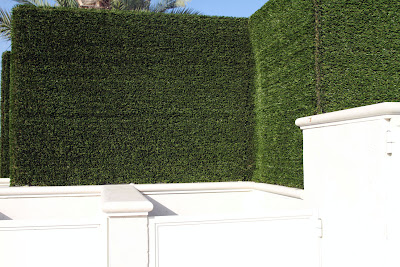 Posted by Adam Nathaniel Furman at 22:05