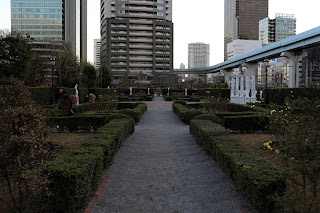 A garden I stumbled upon in the Shiodome area of Tokyo (this bit of town being a landscape of tangled infrastructure with corporate towers stranded on small manicured islands) with a raised motorway on its south, elevated train lines to its north, and apartment towers bounding its eastern and western edges. 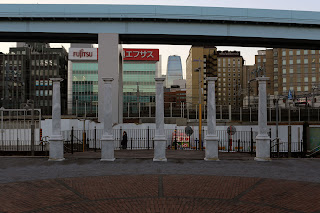 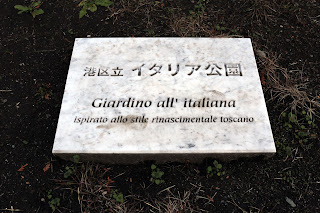 It's an "Italian Garden, inspired by the style of the Tuscan Renaissance", with the statues and Doric columns -all new- having been given as gifts by various stone masons, and stone re-sellers from the Tuscan town of Pietrasanta, which is famous for its marble-working masons' yards. A canny act of marketing that has left a permanent advert for the town's wares in the heart of one of its biggest markets. 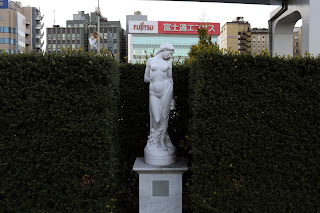 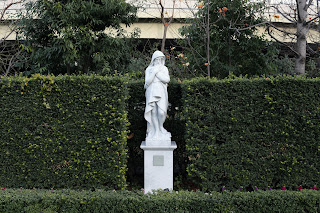 There are reproductions of pieces from a variety of sources, with the two things connecting them being the cartoonish, illustrative quality common to so much contemporary classical-ish sculpture, combined with a perhaps obvious over indulgence of the pornographic aspects of each pose. It isn't quite so explicit here, though definitely present, but I do love the way the grand old tradition survives to this day in debased form (Wilhelm von Gloeden being an early torchbearer), whereby salaciousness is allowed to be present in all kinds of pretentious and aspirational places, by virtue of  a sculpture adopting the general lineaments of a famous 'worthy' pose from antiquity or the renaissance, which is then used as the rough framework around which every tweak and modification is pursued that heightens the suggestiveness, and often downright explicit nature of the depicted body and its potential arousal. 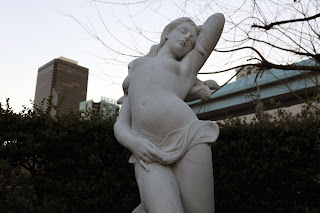 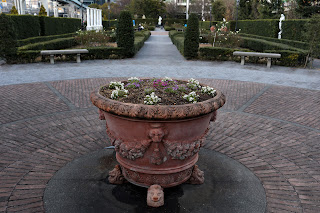 Like the newly built 'Vita Italia' district nearby, there isn't that much to really remind you of Italy, but as with that place, and with so many things that I have come across this past week, it seems to me that what is fascinating here is how an almost graphical image -always singularly different from its source- of another place, as experienced through television, comics and movies, is transposed into the physical environment of the city through the modus-operandi of advertising and consumption. This happens in the UK as well, but I haven't ever quite come across a place where the idiosyncratic readings of another culture are carried through with quite so much passion (think Studio Ghibli's scenography), where the re-readings of the other places have quite such a transformative effect on the source material itself, and where these strange new compound images are then reified on quite such an impressive scale. 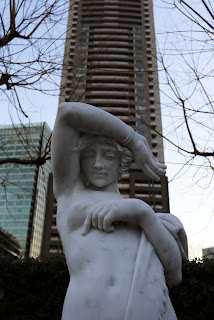 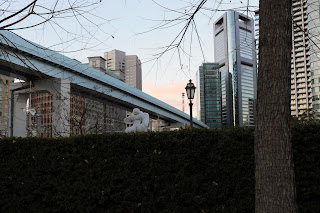 Some of these Japanese transformations of other places are incredibly alluring. They are strange, inscrutable and ultimately very refreshing -invigorating even. For me they breathe life back into dusty old archived material. There is something of the wide eyed wonder of a child in a toy shop about the compulsive appropriation and combination of signs from around the world in some of the places I've had the pleasure of walking around here. I've heard it said that one should never worry about the so called problem of copying, or of the anxiety of influence, because when something powerfully new is born out of older material, its very existence transforms that out of which it sprang, since the older can never again be understood without its being seen through subsequent reinterpretations. The question of origin/original is null, the problematic is rather one of impact, of strength of impression instead of the Damocles' sword of Authenticity. I only wish the egg really did transform the chicken from whence it came -physically- and that back in London we could get some of the profuse strangeness of the way Tokyo sees us, injected back into our streetscape. 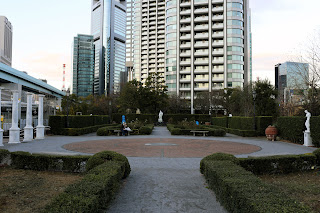 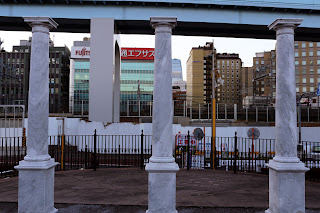 Posted by Adam Nathaniel Furman at 00:07