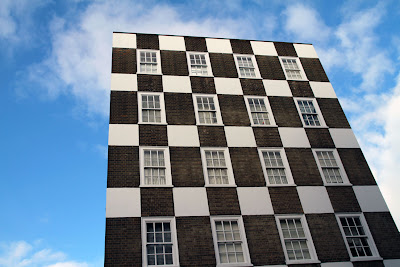 Page Street is a weird and interesting architectural in-betweener. Built on a large chunk of land given over to social housing in the 1920s by the Duke Of Westminster, it was designed by his then favourite architect Edwin Lutyens, who was mostly known for his palatial Country House designs, although he had been involved in the master-planning of Hampstead Garden Suburb just prior to this project, which meant working closely with Raymond Unwin, the great social housing designer of that period in the UK. 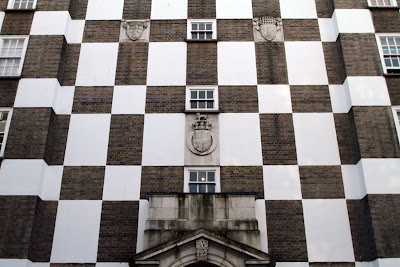 The grid marches across all but the internal facades of the blocks, framing traditional sash windows, and on the long sides looking like some RCA architecture student's project where hundreds of Georgian town houses have been collaged together in photoshop to make a fusion between the Bloomsbury conservation zone and the Heygate Estate. To make things odder, some of the main entrances facing the street are ornamented with heraldic sculpture, are fronted with imposing broken entablature arches with what look like little cenotaphs sticking out the top of them, and have a recessed central section and slightly projecting wings that make them look like Elizabethan palace fronts. 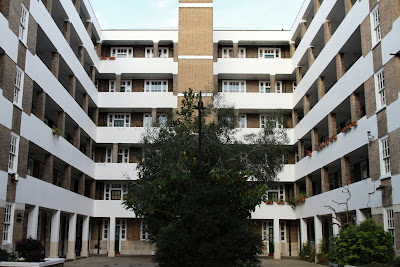 They also have remarkably early examples (for the UK, the first?) of deck access to the flats, reached from central courtyards, an area in the project where there is little stylistic reticence or ambiguity surrounding its programatic modernity, although the moment where (you can see it on the left and right of the image above) the deck balconies hit the sash windows and fragment to become part of the sash-window/brick/white-cement grid that covers the rest of the facades is pretty magical. 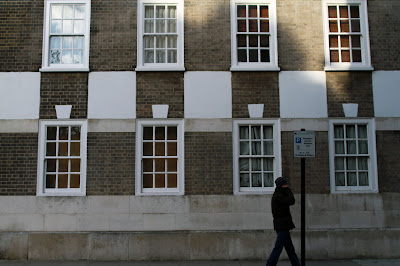 The strips of space between the U-shaped blocks is taken up with landscaped communal gardens and play areas which are a little desolate and dont get too much light, but they at least have a good sense of enclosure, and are directly watched over by lots of windows (easy to shout at your kids to come back upstairs or stop hitting each other), and rather cutely newsagents, hairdressers, shops etc are housed in little lodges arrayed along the road between the blocks and in front of the courtyard areas at the centre of the Us. 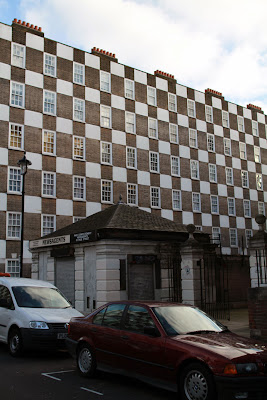 A bit like the Arts & Crafts building on Riding House Street in Fitzrovia (a workshop and offices) by H. Fuller Clark, this project is an imposing glimpse of what strange and contradictory buildings might have been designed if those british architects from Shaw through Arts & Crafts to Lutyens had brought their rhetorical talents to bear in the country's cities, and brought new programs, pressing social issues, and structural innovation together into dialogue with their wonderful & arcane stylistic concerns. 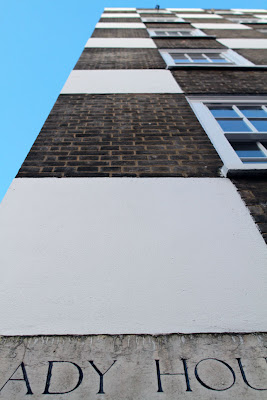 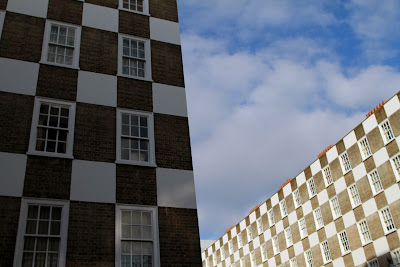 For more info, plans, sections, photos etc check out the development's page over on HousingPrototypes. 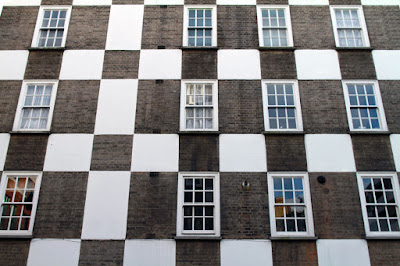 Posted by Adam Nathaniel Furman at 14:50