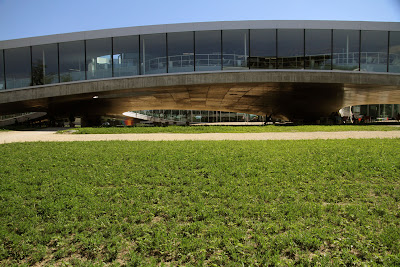 SANAA have done it. They've managed to produce a piece of pure, unadulterated luxury that looks and feels the very opposite of weighty lucre, in a region that expends such a significant proportion of its creative prowess in attempting to achieve exactly that, in the form of exclusive appendages that pretty much fail universally in embodying anything except their weight in gold, or platinum, or Moon-Dust, or Narwhal tusk... 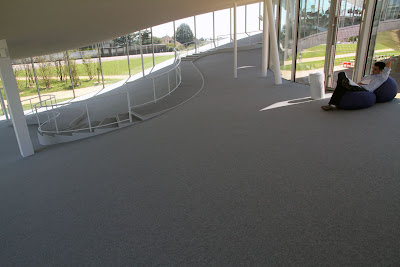 Few things in our cities are more contentious, fought over, valued and hoarded than space. Few things can have such an immediate and direct effect on our quality of life, on the way we interact with each other in our free time, and indeed how we spend our free time; whether we are forced to huddle alone in our cupboard-homes pursuing solitary pastimes, expend our income on leisure activities that turn our free time into a source of consumptive production, or whether there are places where we can enjoy the pleasure of unprogrammed time enjoyed in our own manner, in a public space, surrounded by other people equally doing nothing, or working hard, as they will, together or alone, but in a contiguous space.

^Above is a short video of my sister-in-law being frogmarched by me around a little portion of the building, but here you can see a better video and some of the official spiel.


Parks are one kind of place that provide those sorts of conditions, being free for all to use how they wish, according to some simple rules of propriety. However, while they are usually full of possibilities for wandering, dozing, and playing sports, they do not provide the shelter or the positive means for engaging in activities of the more contemplative, intellectual sort, that are always so well catered for in the local or national Library. 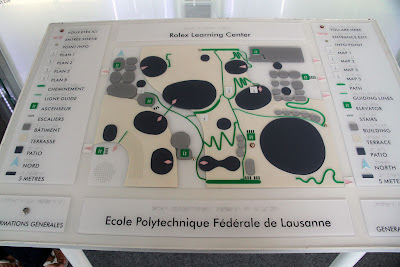 There are Libraries IN parks (Milan, Buenos Aires), but until now I had not come across a park IN a library. We are all quite inured by now to the impotent visual spectacle of our Dubais, Westfields, Cheesegraters, and the tainted feeling of tawdry exclusivity which they attempt to drown us in, ocular euphemisms for the sinister structural imbalances we know they really embody. Walking into a marble-clad lobby, a shiny new inner-city mall, a vast be-travertined atrium doesn't feel special, does not make me feel good, it just feels frightening, it makes me feel watched, isolated, unwelcome, my behaviour must be correct, else guards appear out of nowhere and escort me and my arse out of there pronto. 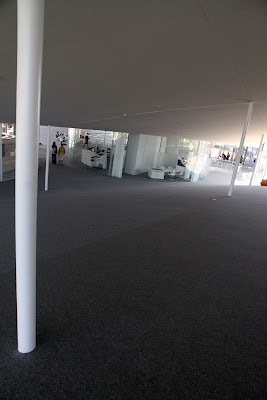 Libraries have even stronger codes of behaviour, they just happen to fit my habits and opinions like a glove.  Its just that their order of mutual respect, and communal maintenance of the perfect environment for thought and study or drawing and writing, is just so much more meaningful and important than keeping people feeling safe so that they continue spending their money on pointless crap. Parks are more open in the range of behaviours they allow, since they have enough space -groups of people can form islands with enough distance from other islands to not disturb each other with their antics; but they are equally free of any obligation to buy, of any duty to be a functional economic unit, to have a direct purpose for being there. And that is a very valuable, and increasingly rare commodity these days: the ability to spend time in a shared space, outdoors or indoors, in which you are not obliged to be participating in any form of economic exchange; in which you do not have to be there for an explicit purpose; in which your presence is not a means to an end other than your presence itself. 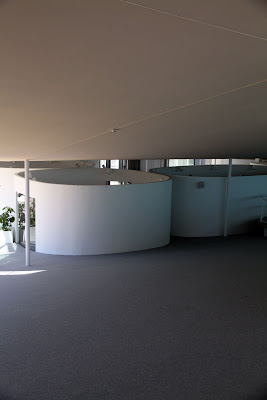 So with the backdrop of libraries closing all over britain like those female ants-with-wings that like to die en-masse every spring, and with new public spaces in London (and elsewhere im sure, but im very provincial) either privately owned and watched over by private security who maintain the right clientele spectrum, or public but designed to discourage loitering through seats that you cant sit properly on (lean-to's), and ledges that you cant lie on, with that backdrop I walked into the Rolex Learning Centre, and it was like someone had dropped me through a wormhole into an impossible alternate reality. 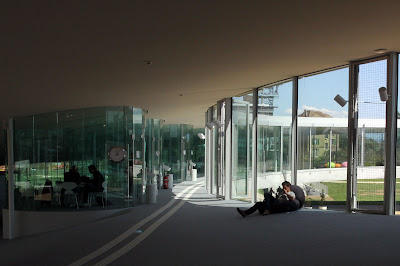 SANAA have always been interested in parks and landscape, in the sense of a field for human interaction and activity, but here they have been allowed to turn the usual logic of building inside out, so that the circulation spaces outstrip the area of programmed space, to be used as occupants wish, wi-fi everywhere, bean-bags strewn throughout, the floor undulating all over the place, and pierced here and there with circular openings that let you look through to the vast grotto underneath. Its full of direct quotes from OMA's 1990 Agadir convention Centre competition entry, and builds on that office's thoughts surrounding the nature of the Library in the 21st century that were developed with the Seattle Public Library project, all pulled together here into the most spatially generous interior I have ever come across. In a way it could be seen as a bit of a No-Stop-City kind of infinitely extendable, totalising nightmare, where the natural and technological have completely converged to turn us into happy self-contained creative nomadic units, but then, in this form I find that much more desirable than having nowhere to go other than a bloody art gallery. 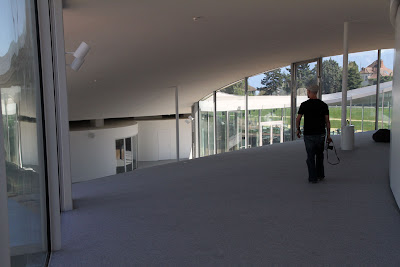 A vast interior landscape (the building's floor area is 37,000sqm), free for anyone to use and enter, to relax on the floor and chat in, attend lectures in, research in, or have dinner and listen to concerts in. A building where so much of the space is devoted to really nothing at all in particular... bean-bags at the ready. It cantilevers and bridges like mad, for no other reason than to simulate nature, stimulate your spatial awareness, and encourage your ability to occupy and enjoy awkward angles (there are lots of tables too). It is white and gray, and as a student of mine pointed out recently -devoid of texture. However that neutrality just brings into focus -almost didactically- the fact that this building provides in luxurious, fecund abundance, the kind of beautifully designed in-between, unprogrammed space, together with freely accessible learning facilities, that are either so etiolated in our cities, or already dying away. Despite all the attempts of new semi-public places like One New Change to appear welcoming, they are simply not, and cannot be by virtue not only of their design (with its nods to public access, viewing deck etc) but of their very raison d'être. 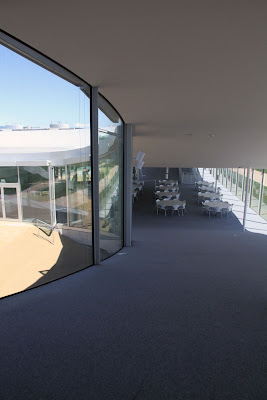 Walking around the Rolex Centre on a quiet afternoon, there was a studious, but relaxed and languid atmosphere. I wanted to stay, I felt welcome, I wanted to make my own corner with book, laptop, sketchbook and cup of tea, somewhere on one of the more out-of-the-way hills, and settle down to do-my-thing. In terms of how the building was experienced (separate to the official blurb and concept, they so often bear no relation to the actual completed building -as in Zaha and Eisenmann's aerial architectures) it brought together the distant sounds, walkers, and clustered picnics of Hampstead Heath with the respectful, sobre collection of concentrating individuals that is my experience of the British Library. Public building for the public, with access to services and public space to work and not work in, the fact that this (aside from the engineering theatrics) felt so totally unusual, luxury, unique, and exclusive (all the words that ring so hollow in adverts for luxury housing developments and boutiques) was, after I left, a deeply depressing thought; that the unusual and singular is no longer that which panders to wealth and exclusion and short-term economic gain, but that which includes, is blind to wealth, and focuses on developing long-term quality of life. As commercial spectacle has long since taken over, this, the undetermined public interior, has become the ultimate in luxury. 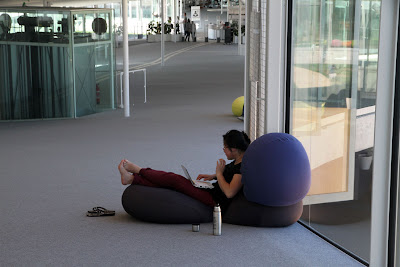 But then this building is not really open to just anyone, and it has a very clear, demographically specific economic purpose. It is tucked away, far from the centre of Lausanne on the university campus, where it took us quite a while to find it. It is a university institution first and foremost, a forward thinking and experimental one yes, but of a very specific context that can afford it, and feels safe in the knowledge that its openness is open to a very specific crowd. This building is an armature of the luxury business and bio-tech that the region fosters -it is a place so wealthy and homogenous that it can afford to develop a new place like this, seeing it as a specific investment in the 'intellectual capital' (and this is the international, wealthy demographic who filled the place) that maintains the country's high levels of industrial competitiveness. The feel good factor that I felt there was, like the copiously amenable corporate campuses in Silicon Valley, geared towards the optimisation of productivity of the students and researchers. But it still made me feel good. 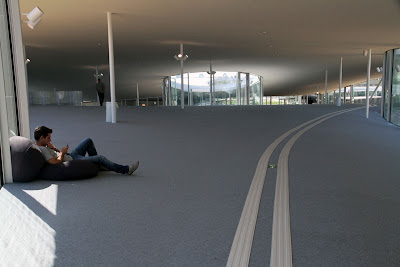 Which is good planning. But why not for everyone? If only the state could again realise what certain academic institutions and corporate bodies (and everyone that Im acquainted with) know, namely that humans need more from their environment than to be shuttled from one place to another, constantly producing and consuming and competing and worrying and wanting and trying... 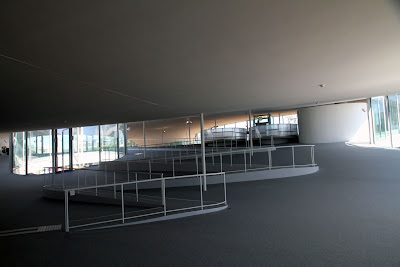 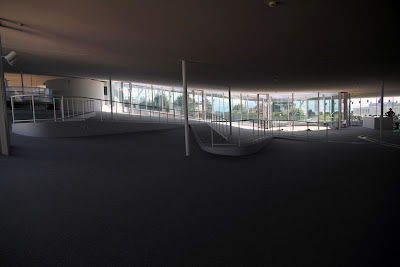 The following are some more images of the interior, which I visited on a sunday afternoon, hence its relative quietness, although there were still substantial amounts of people there, thinly scattered about...
oh, and below is a sort of internal funicular for wheelchairs that navigates one of the steeper areas. 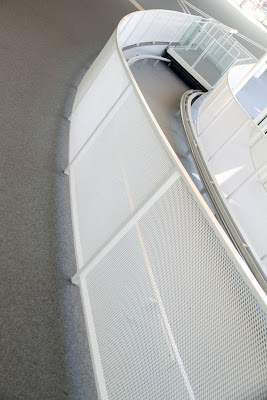 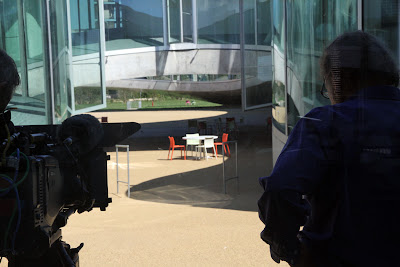 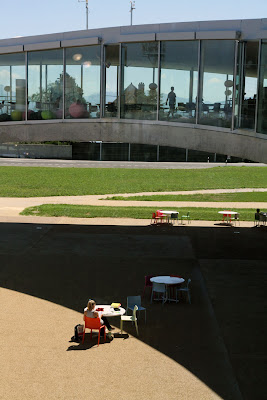 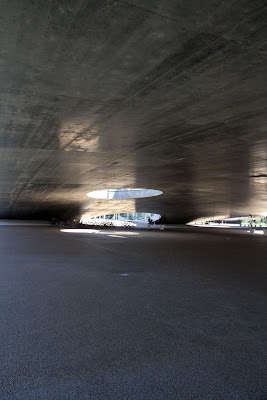 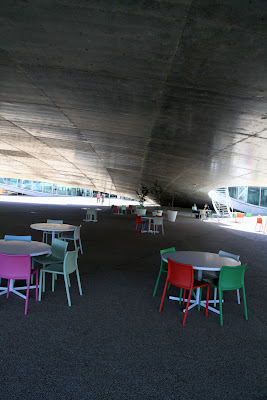 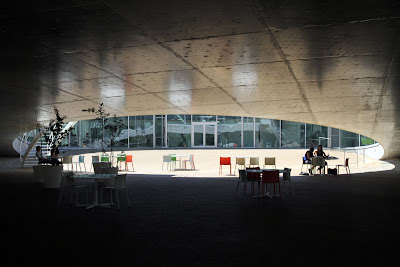 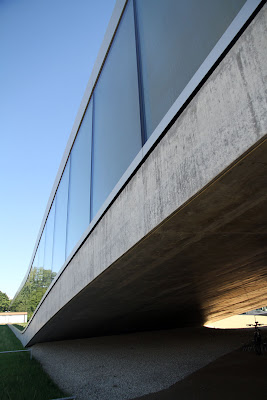 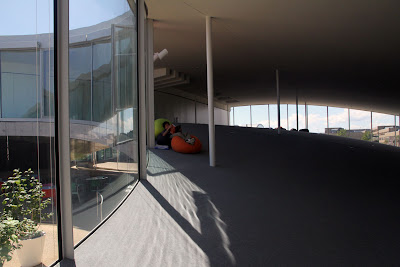 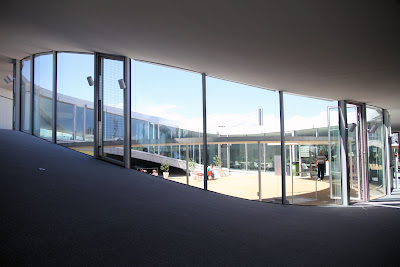 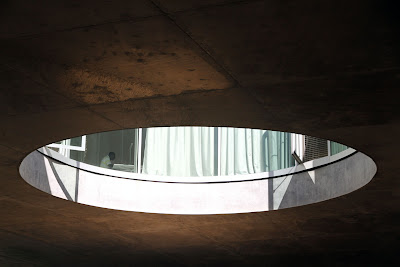 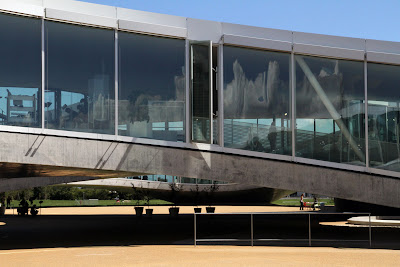 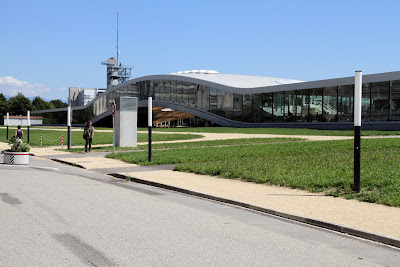 Posted by Adam Nathaniel Furman at 12:27