Seriality, Suspense and Holiness at the Abbeys of Senanque and Silvacane

These two abbeys are the companions in style, order, and period of the previously posted Thoronet Abbey. I said in the post on Thoronet that at some point in the future I would like to go back there "in order to get a better understanding of its appeal", a commitment that held absolutely no pleasure for me, and felt more like a necessary obligation stemming from the lack of emotion stirred in me by that great monument of southern france, lauded by so many architects, and whose lack of instinctive appeal to my sensibility left me feeling rather left out. I could appreciate the intimacy between the organisation of the abbey, and the highly structured routine of the cistercian monks, and how its layout, its design, and even the stonemasonry were to some extent ways in which the order's philosophy was brought into life and material; but the walls were all so bare, the proportions of the stone blocks in relation to the bays and the vaults seemed neither disordered enough, nor composed enough to be either charming or inspired, the light was too abundant to be mysterious, and was somehow flattened into infinite degrees by the dearth of any event, decoration, modulation or flourish on any of its inner surfaces. At best the place left me slightly lost as to my lack of 'wonder', and at worst irritated me as much as if I had been given a plate of diced carrots at a well known restaurant, and been told to "close my eyes and appreciate them one by one". However there were two moments to which I was drawn, the staircase that had been jammed into the corner of a "perfectly" barrel-vaulted hall, and the strange little hexagonal pyramid which sat in the garden of the cloisters, and which was grafted on to their southern end, containing the be-tentacled fountain that served as the monk's washroom (you can see this in the youtube video). In another abbey, I may not have clung quite so much two these two moments, which are lovely, but not remarkable in themselves; but in amongst the interminable grey volumes of evenly divided stone that uniformly unify Thoronet, they shined like gems by virtue of contrast. It seemed that the more acreage of orderly simplicity was bestowed on my eyes by the abbey, the more precious any rupture in that smoothness would seem; and since there was so much uniformity and smoothness, and very few exceptions, like the principle that increases the fetishistic power of a body part in relation to how little else is shown, all architectural pleasure was condensed into those two moments of rupture, heightening their potential to give pleasure far out of proportion with any objective interest they may have embodied.
That specific enjoyment, which for me was the main delight of the abbey (and formed in my memory a sort of 3dimensional, spatialised version of the filmic technique of accumulated suspense), was one I only managed to pinpoint after having visited Senanque and Silvacane abbeys which I enjoyed in much the same way. 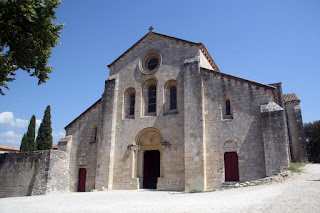 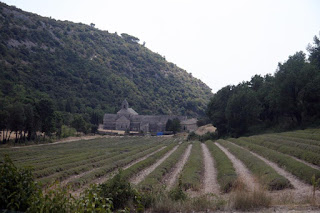 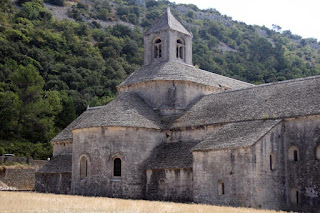 Senanque AbbeyTheir seriality was remarkable, with the organisation of the three being almost identical; and just as small exceptions were emphasised by the marching rigour prevalent around them within each abbey, so the slight differences between the three abbeys were made terribly exciting by their otherwise total correspondence. The site and context of each of them was the most obvious difference, and changed the way they were approached, but even within the abbeys we found ourselves pouring over the plans on the tourist leaflets, trying to figure out what was different, however tiny. The most notable change of all was at Senanque abbey, where the chapel had been oriented differently (see below), meaning that on the approach, rather than the usual picturesque cluster, one saw a facade that differed completely from the other two, dark and monolithic as a medieval fortification, and punched full of variously sized windows. 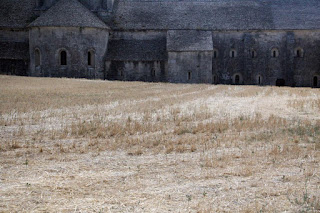 Senanque Abbey
More After The Break...
They were both as spartan as Thoronet and each other, however the tone of their austerity was slightly different, with Silvacane (cloisters pictured below) being everywhere nibbled at the edges, slightly worn down, and always gentler than the other two in the note of tenuousness added by all its missing columns, chipped entablatures and cracked voussoirs; 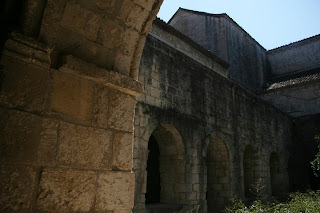 whereas Senanque, with its darker stone (nave pictured below), was more militant than spiritual in its impression, less thoughtful than it was brooding, uncompromising rather than considered. 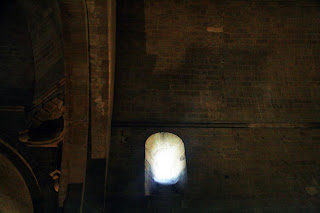 Senanque Abbey, nave vault, window, and vault at the crossing.
Aside from the differences in plan, and the subtle shifts in atmosphere, they nonetheless developed throughout the journey around each of them, the same amplifying of certain architectural moments of exception. Like the glimpsing of an ankle in a room full of burqa-clad women, these moments act like lightning rods for desire, standing in relief against the ground prepared for them by the rest of the space. 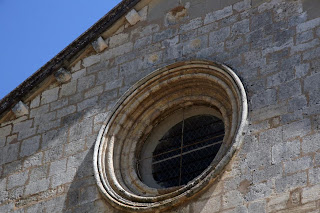 
Whether a window (above), or the remains of some niches and a tomb (below), they attract attention. Through their rupturing of the almost impenetrable perfection of the volumes around them, through rupturing them with incommensurate gestures -while nonetheless being composed of the same material, and fashioned in the same manner- they act to amerliorate any sense of confinement within the architecture. As well as being objects of almost sexual attraction, they act like pressure releases, folds in an unendurable smoothness that hold the prospect of unexpected occurences, unexpected plays of light in the form of the material, unexpected activities in the divine prison that was the life of a monk. 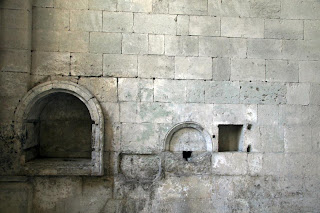 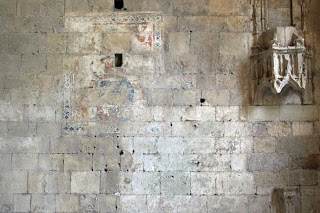 Silvacane Abbey, remnants of a tomb, and a fresco

The most extreme such example were the squinches (which manage the transition from the square crossing to the octagonal dome) in Senanque. At first one almost doesn't notice them, the eye only registering them as hemispheres of shadow, probably because they are in the same dark stone, and formed of the same simple geometries, as the rest of the space. But on approaching the crossing, they rise out of the perfectly dressed blocks of stone around them, strangely unfolding from the pier below them like bizarre architectural compositions depicting men holding rainbows, figurative flourishes that, like the octagonal lavabo in Thoronet and the window in Silvacane, seem as if they should have had no place in their respective programs, and yet all hold pivotal roles, with the geometricised rainbows here being given the divine task of forever holding up the dome of heaven. It seems plausible that for these monks of poverty, order, and exactness, an entire spatial order was only truly harmonious, could only truly maintain a sense of the divine, if its hermetic unity was precisely perforated with points of inconsistency which, like the inexplicable presence of holiness at points in a hard or monotonous life, offer the comfort of an escape, the promise of something richer beyond. 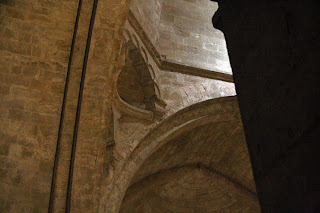 Senanque Abbey, Squinches at the crossing 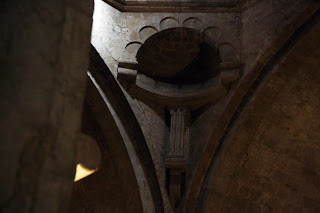 
Sexualised stone, and harbingers of divine escape, the abbeys of Thoronet, Silvacane and Senanque are succinct examples of the redistribution of desire and imagination that is brought about when an architecture is at once loaded with meaning and intent, whilst being simultaneously stripped of as much corresponding elaboration as is possible. 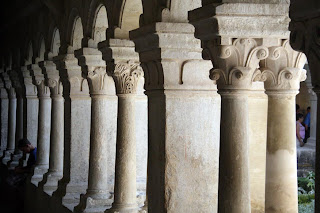 Senanque abbey, columns and capitals in the cloister
Posted by Adam Nathaniel Furman at 11:20